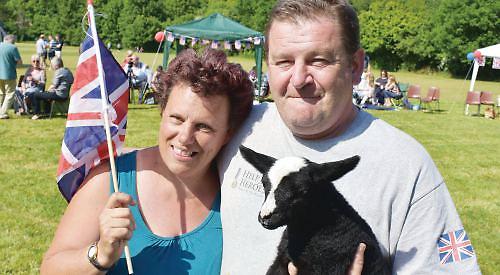 MORE than 250 people attended a party on Whitchurch village green to mark the royal wedding.

Families brought along picnics and enjoyed Pimm’s, Prosecco and champagne as the Roy Bailey Big Band, a 19-piece jazz band, entertained the crowd.

There were activities for children, including hats and animals made from balloons. The event was organised by villagers Lissie Steward and Leslie Maynerd.

Mrs Steward, 45, of Manor Road, organised a similar party to celebrate the Queen’s 90th birthday in 2016.

She said: “It was lovely day to celebrate the royal wedding with our neighbours and the village together. I think it went bloody well and I’ve had lots of people telling me it was brilliant.

“I enjoyed it more than the Queen’s birthday because that day I was in the tea hut all afternoon.

“I just like the idea of getting together because new people move in and they don’t know anybody or work in London and don’t see anybody. Everybody was getting to know each other on Saturday.

“I like Prince Harry because my husband Jon is an army veteran and the prince does a lot for the veterans.

“We haven’t personally met him but friends of ours have said he’s such a fantastic bloke — he really cares.”

Mr and Mrs Steward brought along their two lambs, Flo and Freddy, for children to handle. Resident Christy Riordan said: “I’m a royal fan. The wedding is very exciting and I’m getting into the village spirit.”

Friend Julie Gregory added: “We love Harry and Meghan. I think we particularly love the boys because of Diana.”

Martin Coleman, who attended the celebration with his wife Jodie and daughter Hattie, said: “We only moved to the area three weeks ago and saw this and thought we’d come down, have a look and meet the locals.

“It’s a very British occasion. We’re on the cricket green, drinking champagne to celebrate the royal wedding — you can’t get more British than that.”

The event raised £153 for Whitchurch Pre-School.