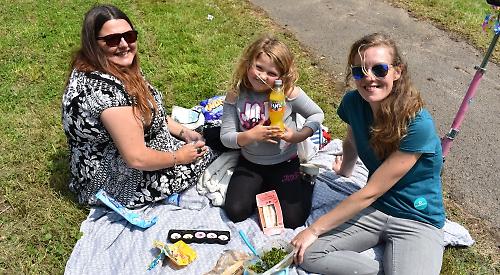 A PICNIC was held at a new community orchard in Henley on Saturday.

Dozens of residents attended Below the Blossom at the site off Paradise Road, which is owned by the town council, in the sunshine.

There were talks by Jan Mirkowski, owner of Fairmile Vineyard, litterpick organiser Jessica Sinclair and Tuc Ahmad, a governor at Badgemore Primary School.

In January, more than 30 trees, including apple, cherry, pear and plum varieties, were planted on the land, while an “edible hedge” of blackberries and raspberries was planted at the edge of the site.

The picnic was the final event of this year’s Chelsea Fringe Henley alternative gardening festival.

Co-founder Victoria Newton said: “The picnic went extremely well and overall we have had a really super Chelsea Fringe in Henley. All the events have been well attended and the feedback has been really positive.”