Pupils perform for their proud grandparents 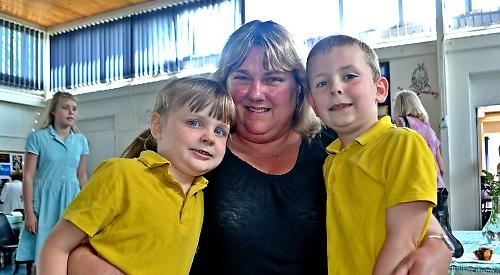 The visitors enjoyed tea, cakes and sandwiches in the school gym and were entertained by the children. Pupils staged a mock Eurovision Song Contest and year 2 children sang a number about the planets as they are currently studying the solar system. Others recited poetry and gave talks about the history of Henley.

A group of eight pupils put on a ballroom dancing display, demonstrating the foxtrot and tango steps which they have learned as part of the school’s new ballroom dance club.

Finally, the children gave their grandparents a tour of the premises. Each table was decorated with painted rocks from the Caitlin Rocks scheme, which was launched by Badgemore primary pupil Caitlin Donaldson, 10, earlier this year.

Headteacher Tim Coulson said: “Grandparents play such a big role in the children’s lives but it’s usually the parents who attend plays and other performances due to limited space.

“This lunch has become hugely popular and is typically oversubscribed so we have to make sure those who can’t make it one year get priority the next. Some came from as far as Yorkshire and Devon. They love seeing what their children have learned and how much they’ve grown in confidence. We’re incredibly lucky to have some fantastic kids here and it’s important that the whole community has a chance to share in what they do.”