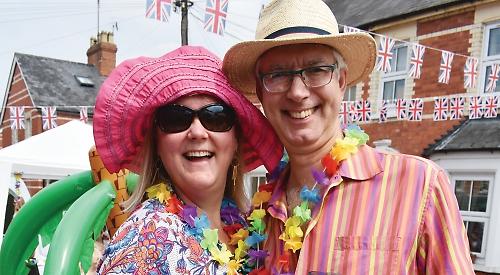 RESIDENTS of a Henley road held a beach-themed street party.

Marmion Road was closed at the junction with Grove Road all day on Sunday as about 85 neighbours and friends enjoyed food, drink and dancing.

Cars were moved from the street so tables and gazebos could be set up.

Residents wore colourful clothes including Hawaiian shirts and swimming costumes, while many had flower garlands around their necks or on their heads.

There was a performance from a band called The Overheated Pilots and a quiz.

It is the eighth year running that the residents have organised a street party, decorating the road with Union flag bunting and banners.

In 2011, they celebrated the wedding of Prince William and Kate Middleton. The following year it was the Queen’s diamond jubilee, in 2013 it was the 60th anniversary of her coronation and in 2016 it was Her Majesty’s 90th birthday.

In 2014, the party marked the World Cup in Brazil and in 2015 it had a Seventies theme. Last year’s event had a sports theme.

Organiser Paul McSweeney said: “It was a very good day. It’s a bit of a picnic as everyone brings their own food and this year there was a beach party theme, which some people took seriously while others didn’t! We very much look forward to the party each year. It has become a bit of a tradition and we are keen to keep it going.

“We are already talking about our 10th anniversary in 2020.”

This year’s party raised £500 which will be split between the Chiltern Centre for disabled children in Greys Road, Henley, Trinity Primary School in Vicarage Road and charity runs for the MS Society and Macmillan Cancer Support.