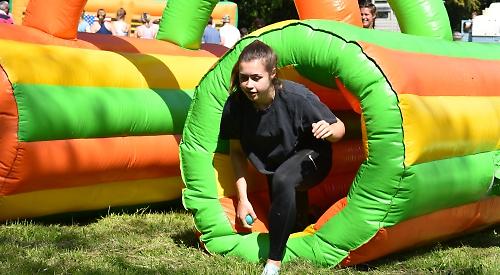 TEAMS took part in a series of games and challenges in the grounds of the Sue Ryder hospice in Nettlebed to raise money for the charity.

The It’s a Knockout-style event was organised by villagers Kate Russell and Jane Alexander Carr, of Ginger Goose Events.

Twenty teams of adults took part, including a team from interior design and home furnishing shop Life At Nettlebed, a group of residents called the Nettlebed Lads and some pupils from Shiplake College.

There were also 35 children involved.

Obstacles and challenges included “off to the shops”, a cargo net and inflatable slide which teams had to negotiate while carrying a bucket full of plastic food, and “the cry baby”, a relay in which participants had to crawl through an inflatable tunnel and throw a ball into a baby’s open mouth.

The winners of the morning session were A Class Team from Nine Mile Ride Primary School in Finchampstead and in the afternoon the Nettlebed Stingers netball team claimed victory.

Mrs Russell said: “We were absolutely delighted with the turnout. The weather was amazing, which really helped the whole ambience, and we had lots of spectators as people made a day of it. Thanks to everyone for their support — participants, visitors and sponsors.

“Because we both live in Nettlebed we are fully aware of the great work Sue Ryder does.

“The hospice is an integral part of the village — the grounds are always open and accessible and people are made welcome.”