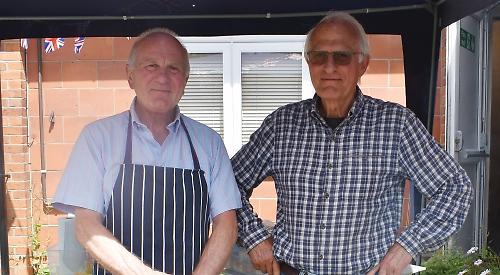 About 100 people attended the event at the hall in Gallowstree Road.

There were stalls selling plants and bric-a-brac as well as tea and coffee, barbecue food, cakes, a raffle and a tombola.

The sale was the first of a number of events the hall is hosting this year to mark the centenary of the end of the First World War.

Clive Mills, chairman of the hall trustees, said: “The event was very friendly and the ladies who organised it did a fantastic job.” The proceeds will go towards maintenance of the buildings and its grounds.

Mr Mills said: “Over the last few years we have focused on the inside of the hall with redecoration.

“Now we need to replace some timber barge boards and there are some trees which may need some work doing on them.”

The hall was built in 1921 and cost £2,000, which was raised from public subscriptions.

The builder was Arthur Butler, whose grandson Ru Butler, a director at Peppard Building Supplies, is to become the hall’s first patron. Mr Mill said: “We thought it was appropriate for Ru to be our first patrol due to the role of his grandafther.

“We had a smaller hall 100 years ago and the trustees decided to build a much bigger one to commend the villagers who did not come back.”

The events to commemorate the Great War will include a film evening on November 9, a themed dinner-dance in the evening of November 10 and a display of memorobilia and an afternoon tea on November 11.

The village beacon will be lit, along with thousands of others across the country, at 7pm on November 11, the day the armistice was signed.

Meanwhile, on November 7 there will be a tea party for the oldest residents of the parish.

A tribute will be led by Nick Launders, who will commemorate all the soldiers on the hall’s memorial plaque. There will be entertainment by pianist Tim Valentine.

The event is for villagers who are aged over 70. If you are, or know of someone who is, eligible to attend the event and were not invited to the similar event in 2014 to mark the start of the war, please call Mr Mills on 0118 972 4154.