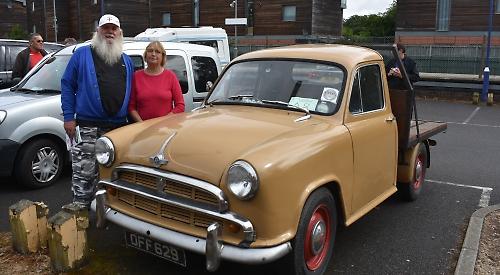 The convoy of buses, coaches, trucks and lorries gathered in the car park at Henley station on Sunday morning.

Dozens of people walked around the car park to admire the different vehicles before they set off for Quainton Road station in Buckinghamshire, passing through Marlow, Stokenchurch and Thame en route.

The first leg of the journey went via the town hall in Market Place to drop off Henley Mayor Glen Lambert. He rode on a 1966 Scammell Highwayman, a 65-tonne tractor with a top speed of 32mph, owned by Roger Annis, from Cowley, Middlesex.

Councillor Lambert said: “I really enjoyed the event. The machines are well maintained and clearly a labour of love for their owners.”

Among the convoy was John Miles, of Deanfield Avenue, Henley, who owns Wilkins Removals. He drove the firm’s 1949 Bedford M-Type.

Mr Miles said: “This vehicle is one we have purchased, rebuilt and put into the company’s colours. Events like this are about celebrating vintage vehicles, of which there are not many examples left because they were workhorses.

“They were not preserved in the beginning like racing cars. That is why they are slightly unusual.

“When we take them out the public love it and there are always spectators on the routes. They like to sit and reminisce about the vehicles.”

Neil and Viv Hodge, from Benson, took their 1957 Morris Oxford Truck on the run as they have done for several years.

Mrs Hodge said: “As this was registered as a truck it’s quite rare. We love everything about this and taking the car out for shows.”

Organiser Janet Ayre said: “It was an absolutely brilliant day. Everyone managed to get to Quainton and there were no problems with traffic and nobody broke down.”

The event celebrates the Ridgeway, an ancient track which is 85 miles long and thought to be Britain’s oldest road. It is organised by the South Midlands branch of the Historic Commercial Vehicle Society.