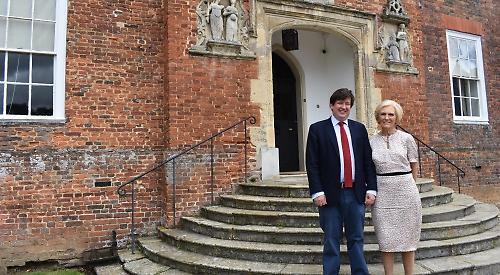 MARY BERRY says she chose to move to Henley because of its beauty and suitability for walking.

The television presenter and cook and her husband Paul Hunnings bought their new property last year and are having it renovated before they move in.

Berry, 83, said they chose the town as they have family living nearby — they have lived at their current home in Penn, near Beaconsfield, Buckinghamshire, for more than 40 years.

Speaking at the first Stonor Food Festival on Sunday, she said: “We didn’t want to move too far from our friends and Henley is only a 35-minute drive.

“The town is beautiful. It has the river and there are lots of interesting walks to do. As the years go, we will be able to walk into the town and it will be nice to not have to get the car out.”

The former Great British Bake Off judge added: “We still need to decide which church we are going to go to and when we are here we will try. We want to take part in the initiatives of the area.”

She took part in a question and answer session at Sunday’s festival and then chatted to scores of fans and signed books.

It was the latest in a series of personal appearances she has made in the area over the past year. Last summer she appeared at Nettlebed fete after being asked by actor Simon Williams and in the autumn she appeared at the Henley Literary Festival, where she was interviewed by Emma Freud. In March she was special guest at the gala night for the 25th Henley Youth Festival.

Berry said: “I think you have got to give back to the community.”

She said she had enjoyed the first series of her latest television show, Britain’s Best Home Cook, which finished earlier this month.

Berry said: “It really built up. Whenever you start a new show there needs to be some time to understand the various challenges.

“Those who watched it absolutely loved it. For me it was lovely to not just be doing baking. It’s proper family cooking.

“The Great British Bake Off got children baking at home and I am hoping that Britain’s Best Home Cook will help get them cooking.”

Berry had Sunday lunch at Stonor Park with the host Hon William Stonor, his wife Ailsa and their children Tommy, Harry and Cecily. They were joined by Lord and Lady Camoys with whom the cook is friends.

She said: “I’m delighted to be here because they’re such beautiful surroundings. People must be delighted when they drive up through the grounds.

“It’s somewhere you can go for a family day out. There is a lot for young people to do and they are able to have a proper day out.” Meanwhile, the festival has been hailed a success. Thousands of people attended the event at Stonor Park over the weekend.

As well as Berry’s appearance, Great British Bake Off finalist Steven Carter-Bailey gave a demonstration of how to make a cheesecake.

There were other talks and demonstrations by experts including one by Nick Galer, chef-proprietor of the Miller of Mansfield in Goring. Other topics included foraging, wine tasting and beer tasting.

A tent was set up where families could sit and watch the World Cup while enjoying their food. The tent was decorated with the flags of each nation taking part in the tournament. There were more than 50 stalls selling food and drink from across the world, including Argentinian empanadas and Lebanese shawarma. Local producers including the Loddon Brewery and Watlington Fine Wines also ran stalls.

The Hon William Stonor said: “I have always wanted to do a food festival and we are thrilled with how successful it was.

“We are really pleased with how it went, particularly on Sunday when Steven Carter-Bailey and Mary Berry were there and it was really busy.

“Mary was wonderful and provided a lot of smiles to people both during her question and answer session and her book signing. I hope the event will grow and grow.”