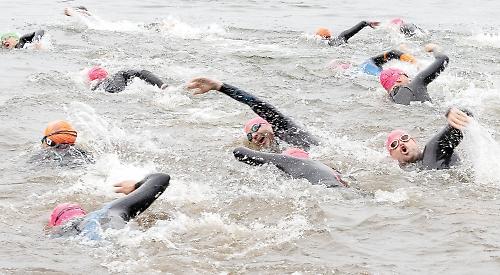 MORE than 100 people took part in the Wargrave Sprint Triathlon on Sunday.

The event was raising money for the Wargrave lido appeal, which was set up to pay for an open-air swimming pool in the village.

The challenge began with a 750m swim starting from the jetty in Ferry Lane. The competitors swam upstream to the railway bridge and then back down to the jetty.

There was short run to the transition before the 20km cycle ride which went out of the village to the A4, up to Burchetts Green, then back towards Henley via Remenham Hilland then back to Wargrave via Kentons Lane.

To finish the challenge competitors ran two 2.5km laps of a route south of the village, via Mill Green, Station Road, High Street and some footpaths.

The overall winner was Sam Barley, from Ruscombe, who finished in one hour, six minutes and 41 seconds. He just pipped Sam Morgan in second and Hal Stevenson in third.

The fastest woman was Sophie Whitworth, of Ancastle Green, Henley, who finished in one hour, 13 minutes and one second.

Fourteen teams of three people also completed the challenge, with a different person completing each leg of the challenge.

Among teams was Tim Dickson, of Greys Hill, Henley, who completed the challenge with his friends Mikes Saunders and Tony Chidwick.

They were part of a group of nine people who did the event as teams.

Each finisher was given a commemorative T-shirt and medal.

When they crossed the line they were also given a glass of champagne.