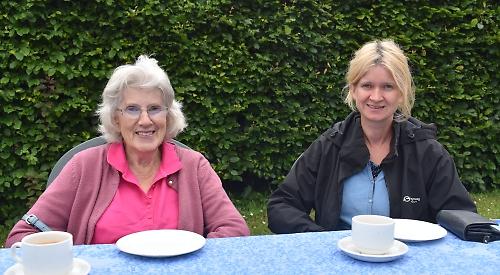 Among the attractions at the village recreation ground were live music and dance, a children’s tug of war contest and a dog show.

An arena was created in the middle of the field, with seating around the edge, where more than 30 children from Steph’s Dancing Divas and Dudes and singing duo The Loops, made up of Richard Lohan and villager Stephen Blackmore, performed.

The dog show had several classes, including one for veterans which was won by Barry Allen, from Charvil, with his Staffordshire bull terrier Lemon.

More than 100 children took part in the tug of war, which was arranged by village Lucius Cary. The fete raised more than £5,000 for good causes including the village church and pre-school, the brownies and the Royal British Legion’s Benevolent Fund.

Organiser Jane Burtt, from Harpsden, said the atmosphere was terrific thanks to the large number of children. “I’m sure they really enjoyed all the things that we had organised for them,” she said.

“The children’s races were very good and we had a mother’s race, which we had not done before. It was rather competitive.

“The fete is a great chance for the village to get together and that’s a big thing for us. It’s traditional and not much changes each year.

“People know what they are coming for and there is something for everyone, both sexes, young and old. It’s for the whole family. As ever, the star of the day was field supremo Jon Moulds and his fantastic team without whom the fete simply would not run.

“A heartfelt thanks to our sponsors, silent contributors, stallholders and, of course, the hundreds who turned up to make the fete the very happy occasion it is.”

The results of the races were as follows: