More than an early morning dip! 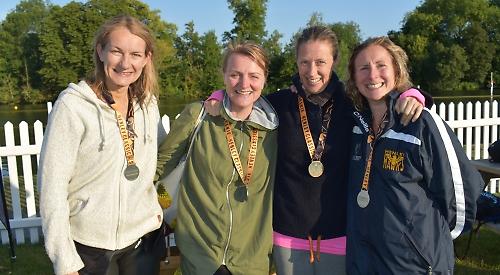 The participants swam 2.1km upstream along the Henley Royal Regatta course at first light on Sunday.

The youngest of the 582 competitors was 14 and the eldest was 74 and only seven of the starters failed to finish.

The water temperature was about 20C, which was warmer than in previous years.

Prizes were awarded in the elite, open and masters categories and commemorative T-shirts were given to swimmers who had completed the event for the 10th or fifth time.

The swimmers included more than a dozen members of the Henley Open Water Swimming Club and several rowers, such as Leander’s Katherine Copeland, a gold medallist in the women’s lightweight double sculls at London 2012, and Alex Partridge, who won silver at the 2008 Beijing Games with the men’s eight.

Justine Small, of Lambridge Wood Road, Henley, took part for the second year running and beat her previous time by more than 15 minutes.

Last year she raised £550 for Badgemore Primary School, where her six-year-old daughter Ava is a pupil.

Mrs Small said: “I knew that if I was going to do the challenge I would want to do it for a good cause. I work in learning support and I want to help get us some more Chromebooks and other learning aids.

“The parents of the kids we support have been really generous and my friends have been sponsoring me as well.”

She is also preparing to take on the Thames Marathon, a 14km downstream swim from Henley to Marlow, on Sunday, August 5.

The winner of the open category was Joel Winter in 28 minutes and 50 seconds, just two seconds ahead of Dan John, a fellow member of Reading Swimming Club, with Will Grace in third.

The fastest woman was Vicky Cunningham, who finished in 28 minutes and 58 seconds, followed by Beth Bryan in second and Michelle Demetriou in third.

Organiser Jeremy Laming, from Sonning Common, said: “The feedback so far has been pretty positive.

“We have people that come back year after year and we have lots of ex-rowers and injured runners.

“I have to say a huge thank-you to all our volunteers. It’s not an exaggeration to say that this event would not happen without them.” The organisers tried to reduce the amount of waste produced by the event by not selling any bottled water and instead making it available from large containers and using recyclable cups.

They also encouraged people to car share when travelling to the event.

Mr Laming said: “We have tried wherever possible to be environmentally responsible, to ensure that while allowing people to enjoy the natural beauty of the area, we are not damaging it in any way.”

The Henley Classic is the first of four events in the Henley Swim series.

It started in 2004 when Mr Laming and Tom Kean, both former rowers, decided to swim the regatta course at daybreak.

The following year 20 others joined them and it continued to grow until it became an official event in 2008.

The other events are the Thames Marathon, the Club to Pub Swim and the Henley Mile, a race downstream along the regatta course which will take place next Sunday (July 15).