Crowds and competitors keep their cool during regatta heats 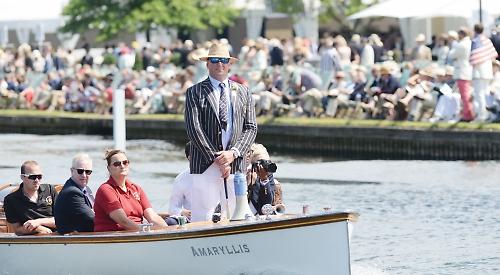 VISITORS and rowers experienced a sweltering start to the 179th Henley Royal Regatta.

Temperatures reached almost 30C on the first day of the event on Wednesday when thousands of spectators flocked to see the start of the racing.

Many had brought parasols or large hats to protect them from the sun, while others were seen fanning themselves with race programmes. While the temperature didn’t reach the blistering heat of 2015, many visitors sat in the shade around the edges of the grandstand or inside the boat tents. Patches of tarmac around the enclosures melted in the heat.

Many of those watching  were wearing the usual colourful summer dresses, shirts and blazers. Unlike in 2015, there was no special permission for men to remove their blazers inside the stewards’ enclosure.

The visitors included Henley Mayor Glen Lambert, wearing a blazer and boater. He had invited Tadej Rupel, the Slovenian ambassador to the UK, as his guest because Henley is twinned with the Slovenian town of Bled.

Mr Rupel tweeted: “Rowing has been connecting Henley and Bled as twinning towns for years.” Police with sniffer dogs patrolled the regatta site and towpath, which was crowded with people.

Many people watched the action from the other side of the river, including Phyllis Court Club, which held a Caribbean-themed party with a steel band and performers on stilts.

Lots of spectators watched the action from boats on the river, one of which was pulling a giant inflatable swan. Two spectators, one dressed as a pirate, sat on floats near the booms, while another group were sent tumbling into the water after their inflatable capsized.

Artist Jeffrey Courtney, from Pishill, set up a tripod and stool as he painted the scene from near the pontoon outside Leander Club.

The temporary barriers along Henley Bridge, which are erected during the regatta each year, were decorated in blue and white stripes.

There were 83 races on the first day, with crews from Henley Rowing Club, Leander and Star and Arrow all recording victories.

A total of 565 boats were entered into the regatta, the third highest total in the event’s history.

They included 111 overseas crews from countries such as Germany, Australia and America. Many American crews celebrated Independence Day on Wednesday.

Tens of thousands of people are expected to attend the regatta over its five days, with thousands more watching the action online.

Many cafés and restaurants in the town have ordered extra food and drink to cope with the demand and extra late-night buses will run tonight (Friday) and on Saturday after train services stop at 10.30pm.