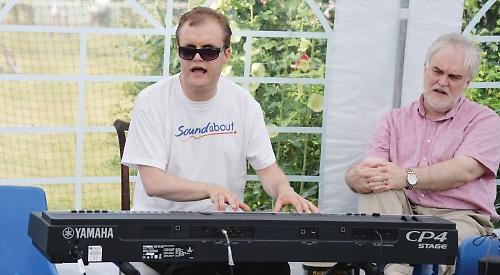 The event raised more than £3,600 for Soundabout, a charity which uses music and rhythm to communicate with severely disabled and autistic children.

It was founded more than 20 years ago by Sarah and John Hunter, who run the farm and hold a fund-raiser every year.

Among the attractions was concert pianist Derek Paravicini, who is blind and has severe learning difficulties.

He learned to play entirely by ear and has memorised thousands of pieces of music.

The visitors, who included Oxfordshire deputy lord lieutenant Lady Hall, from Henley, were invited to walk around the grounds and see rare breed animals and poultry.

Mr Hunter said all the money for the charity was raised through cream teas and rides. The entry fees, which totalled more than £1,400, will go the National Garden Scheme.

He said: “We had a lovely day. It was jolly hot but people seemed to thoroughly enjoy their afternoon. A lot was saying they planned to attend again next year.”