All kinds of music at community choir’s summer concert 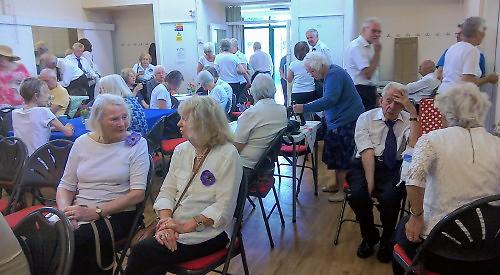 There were six 30-minute performances by different groups of singers from the community choir.

The programme included songs by Gershwin, Rodgers & Hammerstein, Lionel Bart, The Beatles, Claude-Michel Schonberg and Abba. These included Moon River, Can You Feel the Love Tonight and Bare Necessities.

There were solo performances by Susan Rusman and Cliff Pryke.

The smaller Notts Group gave two performances.  Their programme included Five Eyes, Sing a Song of Sixpence, The Rhythm of Life, The Sound of Silence, Both Sides Now, Look at the World, The Rose and I Will Sing.

Clarinetist Jennifer Ellis perfomed a programme over lunch ranging from easy listening to unaccompanied pieces and studies, culminating with Weber’s Theme and Variation I from Silvana Op 33 followed by Miltonality by Paul Harvey.

Between performances the singers and visitors enjoyed cakes and sandwiches. There were also stalls, games and a raffle.

The concert raised almost £1,500, which will be split between 12 local community groups and charities.

Margaret Moola, co-founder of the choir, said: “The whole day of fund-raising activity proved to be a very convivial and relaxed occasion and a huge success.

“Many of the audience remarked on the very beautiful harmony and choral balance the group achieved.”

Nottakwire is open to all and the new term will begin on September 7. If you’re interested, email
margaret.moola@btinternet.com or call 0118 972 1248.