Too hot for ponies but everyone else enjoys village fete 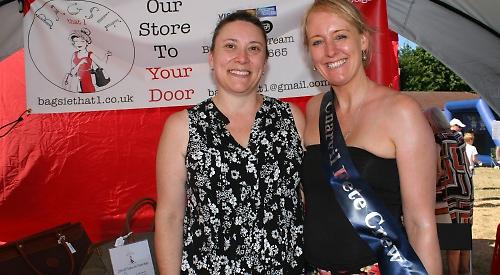 HUNDREDS of people attended Charvil village fete on Sunday in temperatures over 30C.

The annual event took place at East Park Farm playing fields and featured stalls, tag rugby, a cake baking competition and performances by the Hurst Morris dancers, a band called the Scoundrels and pupils from the Spin Theatre Academy in Wargrave who danced and sang.

Berkshire Reptile Encounter brought along snakes for visitors to handle and the three emergency services were represented. Children’s entertainer Zoe Horton was dressed as Princess Elsa from Frozen and kids’ corner had crafts and toys and games. There was also a bouncy castle, a children’s obstacle course and face painting.

Busy Brushes art club, which is based in Charvil, held a competition for children to make a clay bird.

Nyama Catering, of Ipsden, ran a barbecue and refreshments were provided by the Charvil Primary School parents’ association.

Plans to have pony rides by Lands End Equestrian Centre in Charvil were cancelled due to the heat.

Many families took shelter from the sun in shade around the site, and Maurice’s Ice Creams did a roaring trade.

Sarah Stonhold, who chairs the organising committee, said: “It was sweltering but we had a good turnout and everyone commented on how fantastic it was.

“Everything went according to plan. The only thing was the heat but we had plenty of shade.”

She thanked Marcus Carpenter for providing the PA system and commentary on the day and the Piggott School’s head girl and boy Isabelle Rees and Harman Sondh who encouraged students to volunteer for the day.

She also thanked Charvil Parish Council, Chris Drew and members of the committee who were all new.