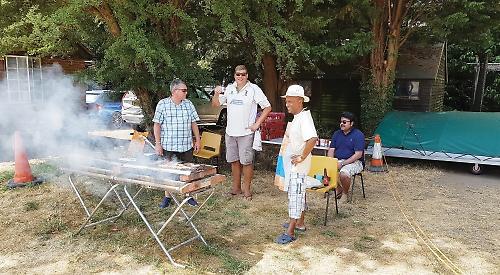 A FAMILY fun day at Peppard Stoke Row Cricket Club raised £5,000 towards a rebuilding and renovation of its pavilion.

More than 200 people attended and dozens of players from the club took part in matches.

The club’s Unicorns and Maharajas sides contested the final match of the day, with the the Unicorns coming out on top by seven runs in a Twenty20 fixture.

The other games included players versus coaches and matches between mixed sides of junior players.

The club raised £2,000 through a silent auction, £2,000 from the sale of bricks for their buy a brick campaign and £1,000 through food and drink sales. The money raised means the club has now collected £28,000 towards improving the sports pavilion in Stoke Row Road.

Andy Watts, vice-chairman of the club, organised the event with his wife Nichola. He said: “This club is in a great place and I’d like to thank everyone who took part, bought raffle tickets, auction prizes and everything else.”

The club hopes to raise a further £7,000 to contribute towards the pavilion project, which will cost about £300,000, and include a new roof, large changing rooms and a modern kitchen and the disabled access will be improved.

It’s next fund-raising event is a sponsored bike ride on August 19.