Artist flies upside down in Spitfire at 30,000ft 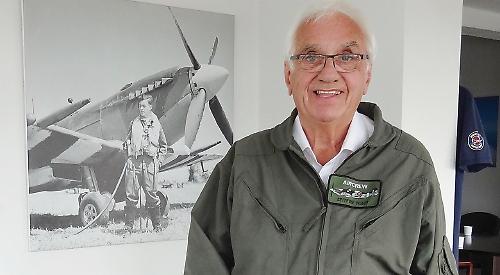 AN artist from Henley enjoyed a flight in a Spitfire at the age of 81.

Bill Mundy spent 30 minutes in the cockpit of the Second World War fighter plane as it followed a circuit of about 250 miles above the Kentish countryside from Biggin Hill Airport, which was a principal fighter base during the Battle of Britain.

He was strapped into his seat by five belts and had to wear a parachute at all times in case he needed to bail out. He wore a fireproof jumpsuit and gloves plus a helmet with a built-in microphone so he could talk to the pilot, whom he sat behind.

Mr Mundy, of Wargrave Road, was briefly allowed to control the craft, during which time he waggled the wings from side to side using the joystick, and allowed the pilot to perform a “victory roll” in which he rolled the plane through 360 degrees along its central axis.

It was the first time he had sat in a wartime plane since the conflict itself, when he discovered a downed plane of unknown origin while walking through woodland near Earley with his family.

He would also see Spitfires flying above Wokingham, where he grew up, and would admire his older cousin John’s wood carvings of the fighters but says he never expected to fly in one himself.

Mr Mundy, a former advertising agency director who painted an image of a Spitfire flying over Henley about seven years ago, learned that Spitfire flights could be booked for £2,500 about two years ago.

He began to save by putting five per cent of his commissions towards the cost as well as any National Lottery and Premium Bond wins.

He travelled to Biggin Hill with three friends on Thursday last week and was given a tour of the airport’s museum, which houses several Spitfires in varying degrees of repair, before being given a safety briefing.

Mr Mundy said: “You’re allowed to walk away and take all your money back right up until the moment you take off — and after the briefing, I can well imagine that some people do.

“They warn you about every possibility including death and explain that you might have to jump out, which thankfully wasn’t necessary. They showed you the button to release the cockpit cover and how to deploy the chute if it doesn’t open automatically.

“As they were fastening me in, they were asking if I’d understood everything and I said ‘yes’ but I honestly don’t think I did. I’m not sure what would have happened in an emergency!

“It was unbelievably tight with barely an inch or two of clearance on either side of my legs and there are dual controls which I had to stay well clear of otherwise it could have been a rocky take-off.

“I was expecting to see a few modern refurbishments but the whole plane consisted of original parts, all of which were still working perfectly. It was a bit uncomfortable as I’ve got a stiff knee but it was bearable and definitely worth it because it was so thrilling.”

The pair took off at about 4.30pm, when the skies were clear with only a few small clouds. Mr Mundy was allowed to take control of the plane, which was built in 1944, for a few minutes once it reached its maximum altitude of about 33,000ft.

He said: “It’s nothing like taking off in a commercial jet because it only has a top speed of about 300mph and at first it’s barely noticeable that you’re climbing. It felt like it took ages to get off the ground.

“The enormous roar of the Rolls-Royce Merlin engine was absolutely thrilling and unmistakeable. I remember it well from my childhood because nothing else sounded quite like it.

“My pilot said it was the perfect time for our flight because the skies were so clear. He had taken two other people up that day but I had the best views.

“The controls were so incredibly light that I could hold them with my little fingers and gently guide them. You only had to shift them half an inch either way and the wings would respond. I would have been allowed to control it for quite a while but I just did it for a few moments to see what it was like.

“When the pilot asked if I wanted to do a victory roll, I hesitated but then I thought ‘this is the only chance I’ll ever have to do this’ so I agreed.

“It was strange to be briefly upside down and I felt as though I was going to fall out of my seat but I was securely strapped in.

“There wasn’t the slightest feeling of sickness during that manoeuvre or any part of the flight, which is unusual considering that I often experience vertigo.

“Being so high up really brought home how small our craft was as we passed over fields, reservoirs and woodlands.

“It seemed barely any time before we were landing again and I was absolutely exhilarated.” Afterwards he was presented with a certificate signed by the pilot and a commemorative video of his flight.

Mr Mundy, who served as an Army cartographer during the Malayan emergency as part of his National Service, said: “The landing was a bit bumpy but it didn’t bother me in the slightest. I was just sad that it was all over. I could smell the engine oil and fuel the day afterwards.

“It’s great that these Spitfires are being maintained so well and the staff at Biggin Hill are so enthusiastic although they were talking a lot about people who died, which isn’t what you want to hear before a flight.

“It’s not for everyone because you get jolted about a lot and it’s very noisy but it’s living history, especially with the RAF celebrating its 100th anniversary this year, and I would never have expected that I’d be in one when I saw them flying as a boy.”