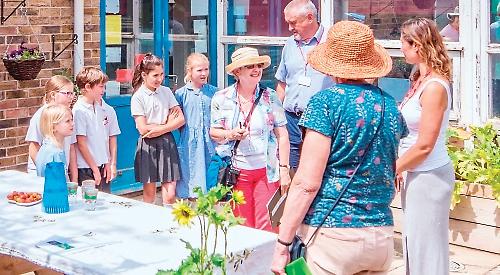 ORGANISERS of Goring’s annual entry into the Britain in Bloom competition are hoping for another successful result following this year’s inspection.

Judges Ben Stanesby and Julie Graham spent about two hours walking around the village last Wednesday and talking to volunteers who have spent the past 12 months planting flowers, clearing litter and improving neglected areas.

They were escorted by members of the Goring Gap in Bloom committee including chairwoman Stephanie Bridle, who began by showing them the courtyard at the village primary school off Wallingford Road.

This is home to a gardening project run by parent Sophia Cleverly, whose daughter Calypso is a pupil. The youngsters grow herbs and salad vegetables and are taught to prepare them as well as selling them at the school’s annual summer fete.

Mrs Bridle, of Cleeve Road, said: “It looked wonderful despite the recent dry weather. The children had lots to show us and were very proud of what they’d achieved while Julie got on very well with them as she’s a retired headteacher.” They then visited the Withymead nature reserve on the village’s northern outskirts, which is home to a number of unusual flora and fauna including the Loddon lily, which flowers in late spring.

After returning to the village centre the judges were shown the station, where the committee has planted an earthen bank on the eastern platform with an assortment of shrubs.

They wanted this to be ready for last summer’s visit, which was filmed for an episode of the BBC’s Britain in Bloom that was broadcast in April, but fell behind after discovering they needed extra topsoil at the last minute.

Mrs Bridle said: “It was great that they could see it after what happened last year and we’re proud of how we pulled it together under such dire conditions. They seemed impressed and Ben said it was more beautiful than he’d imagined.”

The group saw the hanging baskets in Upper Red Cross Road as well as the pink wheelbarrow planters contributed by the Gap Festival.

They inspected the flower beds on Gardiner recreation ground and met Keith Walker, who maintains the pitch for the village cricket club, then looked at the floral baskets in High Street, including the large displays at Masoom’s Tandoori and The Arcade, and on the bridge.

The group visited the courtyard garden of Terry Walker, of Cleeve Road, then looked at the sunflowers at the Wheel Orchard allotments, the tallest of which reached 3m, as well as a new flower bed planted by Paul Airey and Sarah Morton, of Wallingford Road, and their children Robert and Lucy.

They finally had tea at the village hall. Here they met Patricia Bradstock, the chairwoman of the Goring Village Greenfingers gardening club.

Mrs Bridle said: “We’re very pleased with the support we’ve received from the community. Everyone pulled together to showcase the village at its best. It’s hard to say what the judges thought but they definitely seemed to be enjoying themselves.”

The results will be announced on September 26. Since its first entry in 2012, the village has won three gold awards and two silver gilts in the small town category of the Royal Horticultural Society contest’s Thames and Chilterns region.