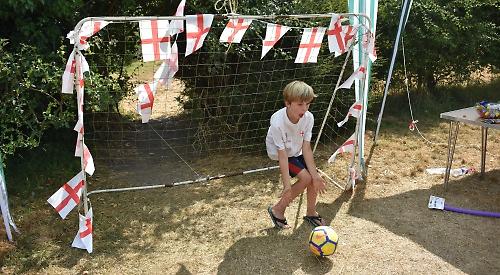 Locals and their pets flocked to the event as temperatures reached almost 30C.

An arena was set up on the village common and pets were judged in a range of categories including most handsome male, prettiest bitch, waggiest tail and most obedient.

The show was run by Woofits Walkies and prizes were provided by Naughty Mutt Nice, both of which are based in Henley.

Dozens of dogs were entered, with the most popular categories being most handsome dog and prettiest bitch.

Paddling pools and water bowls were also dotted around the site to keep the dogs cool in the heat.

The winners were given “pawdicure” vouchers for Naughty Mutt Nice, as well as dog bandanas, a bottle of Pawsecco and a pack of vegan dog biscuits. The runners-up received a goodie bag including a spa treatment at Naughty Mutt Nice.

Laura Poole of Woofits Walkies, who organised the dog show, said: “I was chuffed with the amount of people who turned up. There were all different breeds and lots of new people as well.

“We had them walking around the ring and for the ‘most obedient’ award we got them to do the most sits in a minute. The winner, Louie, even jumped on his owner’s back!”

Other attractions included a raffle with a prize of a flight in a light aircraft piloted by Kevin Duthie, who lives in Middle Assendon.

The Goring & Streatley Concert Band also performed throughout the day, while Kids Corner returned with stalls for children run by children. There were fairground games including hoopla, a penalty shootout and a version of petanque where competitors attempt to break an egg by throwing a metal boule on to it.

Organiser Emma Beesley said: “The villagers of Bix and Assendon turned out in force for this annual event that aims to bring our three villages together.

“The proceeds are still being collected, but the money raised on the day is slightly over last year which is a fantastic achievement on such a hot day.

“The proceeds will go towards the fund raising initiative focused on transforming St James Bix into a accessible much needed community space enabling the three villages to come together on a more regular basis.”

The winners of the dog show were as follows: The prettiest bitch was Lexi, a two-year-old Giant Schnauzer owned by Bix resident Steve Hercus. There were also prizes for Louie, a six-year old Cavapoo owned by Penny Gilbert (most obedient), Ava, a three-year-old Saluki cross owned by Laylah Wallis (best rescue), Seb, a four-year-old labrador (most handsome) and Mabel, a nine-month-old Cockalier (waggiest tail).