Ferrari fun day is washout with visitors down 70 per cent 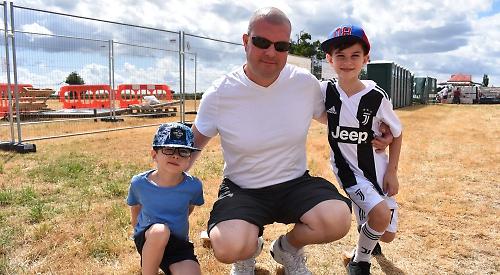 ABOUT 500 people attended the second annual Ferrari family fun day in Sonning Common at the weekend despite poor weather.

The Thames Valley Ferrari Owners’ Club hosted the event in a field off Blounts Court Road but it was hampered by wind and rain.

There was a static display of Ferraris from the last 50 years in the Johnson Matthey car park, off Widmore Lane. Guests were also able to enjoy ride experiences with Sporting Bears, a group of classic car and sports car enthusiasts who raise money for children’s charities, in exchange for a donation.

The event raised about £1,200, which will be split between the Thames Valley Air Ambulance, the Sporting Bears Motor Club, the Cori’s Disease Trust and the Ways and Means Trust in Peppard.

Organiser Anthony Morris, of Blounts Court Road, said heavy rain on Friday night after stallholders had set up and all day Sunday hit the event.

The overall attendance was down by 70 per cent on last year with no visitors at all on Sunday.

Mr Morris said: “The weather made it something of a disaster. We had high winds from the start, which meant we could not put some things up. Some of the stands were destroyed and some of our concessions had to leave.

“Sunday was a washout with nobody turning up and three-quarters of the concessions deciding to go home.

“The weather won. Despite this, we did manage to raise some money for the charities.”