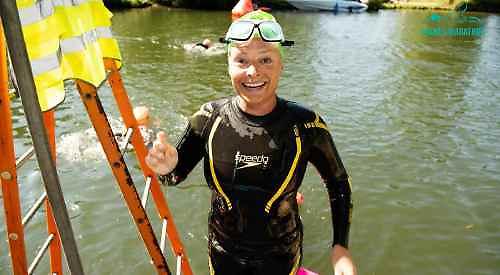 Swimmers aged 18 to 76 completed the 14km challenge from Leander Club in Henley to Marlow Bridge.

Most wore wetsuits as they were set off in three waves from 7am.

The first woman to finish was Jennifer Wilson in a time of two hours, 52 minutes and 41 seconds.

The course was divided into four sections — Henley to Hambleden lock, on to Medmenham, then to Hurley and Temple Lock before the final push to Marlow. At each stop the swimmers got out of the water for food and drink.

Among the locals taking part was Laura Reineke, founder of Henley Music School, who finished in four hours 52 minutes with a group of fellow members of the Henley Open Water Swimming Club.

She said:  “It was fantastic. I would do it again today if I could. The last section along the wider bits towards Marlow never seemed to finish but the rest of it was beautiful. I felt absolutely brilliant at the end — I’m still on a high now.”

Event organiser Jeremy Laming said: “It went really well. We were not far from being sold out.

“We had made some improvements to the customer experience and obviously the good weather helped.

“It’s a fairly niche event because there’s not that many people who can swim 14km so you have got to take it pretty seriously.

“The thing that pleases me most is that people keep coming back year after year. It’s very much a source of pride that we have created something so popular.”