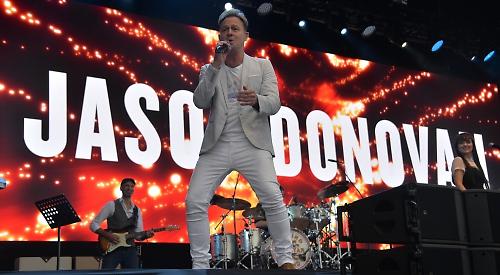 Thousands of people dressed up as music and TV stars from the Eighties as they attended the Rewind music festival.

Crowds flocked to Temple Island Meadows in Remenham over the weekend, where they were treated to performances by 24 acts on the festival’s 10th anniversary.

They included headline sets by Kool & The Gang on Saturday and Orchestral Manoeuvres in the Dark on Sunday, as well as Rewind regulars such as Midge Ure, Chesney Hawkes and Henley resident Carol Decker.

Many of the acts had performed at the first Rewind in 2009 and were returning to mark the milestone.

Visitors dressed up in colourful outfits for the festival, donning day-glo leggings, headbands and skirts, while others came as stars of the era including Adam Ant, Prime Minister Margaret Thatcher and footballer Kevin Keegan.

Others paid tribute to popular films and television shows of the Eighties, coming as characters including Beetlejuice, the Flintstones and the Teenage Ninja Mutant Turtles.