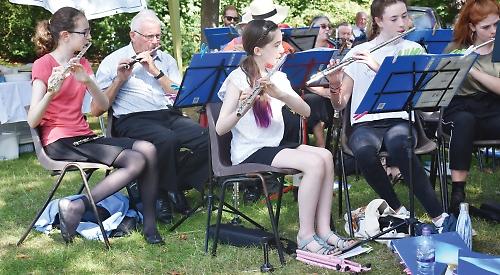 A BAND set up for children and novice musicians almost a decade ago played its biggest ever concert in Goring.

The musicians, whose ages ranged from nine to 82, started with a medley of Abba songs and also included Waltz No 2 by Shostakovich, the theme from The Great Escape, several songs by Adele and an Eighties medley that included Thriller by Michael Jackson. Dozens of families sat on the grass to listen and enjoy picnics and bystanders gathered on Goring bridge and took photos.

The concert was conducted by the band’s musical director Claire Salmon.

It was part of the Cleeve-by-Goring Women’s Institute’s annual summer tea at the lock. WI members served hot drinks and cake.

The band, which rehearses at Goring community centre in Station Road every Monday evening, began with only 12 members but has gradually expanded to 75, including 15 saxophonists, eight trumpeters, four trombonists and dozens of woodwind players and percussionists.

It has previously given a number of indoor concerts and performed at village fetes alongside the main band.

Bob Edwards, the group’s chairman and percussionist, said: “It went very well and everybody really enjoyed it. The weather was excellent and I’ve never seen the lock so busy, which was great for the Women’s Institute.

“We’ve got a good range of instruments in the starter band now and Claire has done an incredible job in raising the standard of playing.

“She is very dedicated to the role and we’re very thankful for everything she has done.”

The concert band was formed in 1977 to celebrate the Queen’s silver jubilee and staged a 40th anniversary celebration concert last summer.

The main band will next perform at Rotherfield Greys village fete at Greys Court, near Henley, at 1pm on Sunday.

The starter band will play a Halloween-themed set at Goring village hall on November 4 from 7.30pm.