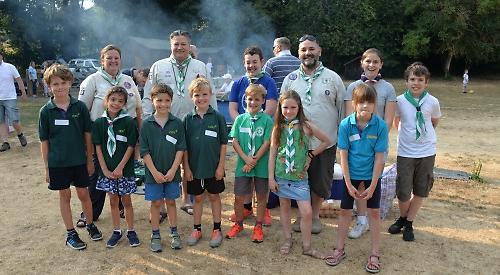 MEMBERS of the 1st Henley Scouts enjoyed a barbecue and activities evening.

About 50 children from the group’s beavers, cubs and scouts sections took part in the event, which was held in the grounds of Harpsden village hall.

They played ball games, took part in tug of war competitions and threw wet sponges at their leaders who had volunteered to go in the stocks. Andrew Gadd, district commisioner for the Thames Chiltern scout district, and his deputy Ray Wooloff presented wood badges to Friday scouts leader Oliver Brett, Friday cubs leader Craig Elliot and Monday cubs leader Dave Robinson. These badges recognise that they have mastered all the skills required for their roles.

Linda Cookson, the group’s Friday scout leader, was presented with a five-year service award. Also present was former Henley scout Maud Towers, who is now in the Wallingford Explorer Scouts for older teenagers, and was raising money to attend the Scouts’ World Jamboree in America.

The event used to be held every year but had lapsed in recent years.

Mrs Cookson said: “It went very well and the kids had a lot of fun. We didn’t quite get the numbers we’d hoped for but a lot of families head straight off on holiday once school finishes and those who did attend had a lovely evening.

“It’s a nice way of seeing out the summer term and for the children to get to know each other, especially if they’re just about to go up to the next section.”

She thanked scout leaders Dave Adamson and Rhidian Williams for organising the evening.