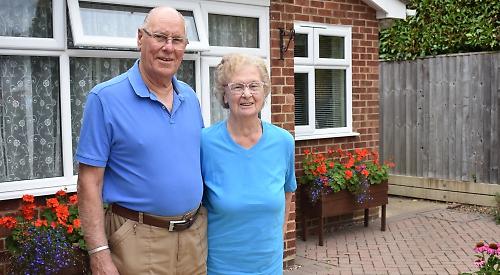 THE winners of the Sonning Common front garden competition had to cope with the summer heatwave to keep theirs looking its best.

Tom and Audrey Cook, of Baskerville Road, say the unusually high temperatures meant they had to do lots of extra watering but their heat-loving plants thrived.

The couple, both 84, moved to the village 35 years ago from Tilehurst and Mr Cook has done most of the work.

He said: “We’ve always done the garden together since we were married but I wouldn’t say we were experts.

“This year it has been tough with the weather, which has been exceptional. We have seven water butts around our place but they ran out.

“We have some more exotic plants that have done exceptionally well in the heat.”

Mr Cook, a retired service engineer, grows his flower plants as well as producing cucumbers and tomatoes in the greenhouse in the back garden. He said: “Some of it is grown from seed, which is my favourite way of doing it. You get more satisfaction.

“I put in a new batch of seeds each season. I keep one or two things like dahlias going in the winter but I mostly focus on getting flowers and plants ready in the spring.”

The couple, who have three children and four grandchildren, were shocked to receive a note saying they had won the competition as they didn’t even know their garden had been judged.

The note was addressed to “the head gardener” and was delivered in person by competition organiser Maureen Stevens.

Mrs Cook, who used to work at the village chemist in Wood Lane, said: “I told her we were not gardeners but she insisted I read the note.

“It was such a nice surprise for us. I thought the judges’ comments were really kind. They called the garden a ‘showstopper’, which was so nice of them.”

Mr Cook said: “When the lady said it had been judged a month or so before I told her it had changed since then.

“The plants had come to the end of their lives so we took them out and put some other ones into the tubs to tide us over until the autumn.

“The judges seemed to be attracted to our agapanthus, which were royal blue but they’ve gone over now. We had African marigolds, which were a golden colour, on one side of the garden.”

The garden also features two flower tubs, a tiered planter, some wall boxes and a small lawn with a flowerbed.

The couple took out a row of conifers at the end of last year.

“It means people are now able to see the garden,” said Mrs Cook. “We think it’s nice for people to take a look at it when they walk past and the neighbours often say how lovely it looks.”

Mr Cook added: “And we were fed up with cutting the conifer hedge as we’re getting a bit older.”

He said that gardening was a good way for them both to stay healthy and active. “It keeps you fit,” he said. “I don’t want to just sit around.”

The annual competition is organised by Mrs Stevens as part of the Chiltern Edge Horticultural Society’s summer show.

She and two other judges went around 18 gardens put forward by members of the society and the public.

Mrs Stevens, of Inglewood Close, said: “The winning garden just had a wow effect with the huge agapanthus with bright blue colours alongside the giant marigolds. It was very, very eye-catching and vibrant.

“It gained the highest number of points between us.”

Second place went to Roger and Carole Parker, of Woodlands Road, and third place to Margaret Moola and Elaine Williams, of Sedgefield Close.

The Cooks will be presented with the trophy at the show at the village hall tomorrow (Saturday).

The show, which runs from 2pm to 4pm, has classes for produce, horticulture, art, photography, cookery and children’s entries.