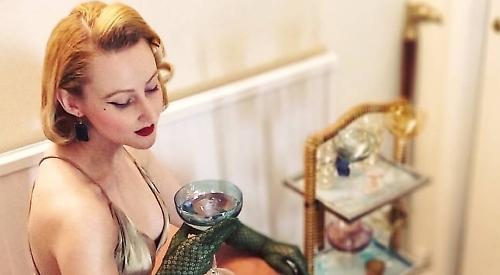 A WOMAN hopes to win a beauty contest with a difference.

Lili Tuttle, 31, of Badgemore Lane, Henley, is one of 20 women hoping to make the final of Miss Pinup UK to find the country’s best vintage glamour model.

The competition has been held annually since 2013 and involves the public in choosing the five models for the final, which will be held in Bristol on October 5.

Ms Tuttle, a paralegal, says she loves fashion from her grandparents’ era and first entered the contest in 2016, when she made it through to the semi-final. She said: “I had a brilliant time. It was amazing meeting all the different contestants from around the country. I got to make lots of friends and always said I wanted to enter it again.”

She didn’t enter last year as she was getting married to Grant Wheatley, who runs his own garden maintenance business.

“That was the priority but when it got to 2018 and the contest opened again I decided to enter,” said Ms Tuttle. “I’m quite excited about it. There are some old faces and I’m looking forward to meeting everyone again.

“The contest has a family atmosphere. I used to think that was a bit saccharine but as I got to know everyone and got more involved I realised that’s the perfect term for it. Everyone is very supportive.

“On one occasion when I’d lost part of my outfit the others went through their things to come up with something for me to wear.

“There’s a stereotype that women are catty, especially at competitions, but this has a very supportive atmosphere. It’s very accepting of people of all different shapes, sizes and ages. It’s a pageant for everyone.”

As well as sporting a vintage look, entrants must demonstrate a special talent. Ms Tuttle, who has a degree in costume design from Bournemouth University, says her talent will be making her own outfit if she reaches the final.

She said: “I’ve got a whole bunch of costumes planned but I’m keeping them secret. I will definitely be making something spectacular to wow the judges should I get through. It’s not just about the look of the contestants, there’s also an emphasis on your talent, which can be absolutely anything. Last year the runner-up was a beekeeper and there were also motivational speakers as well as traditional talents like singing, dancing and playing a musical instrument.”

Ms Tuttle, who polled hundreds of votes online, added: “I’ve been overwhelmed by all the support. My family and friends are always supportive but I also get stopped by people commenting on my look.”