Picnickers enjoy party in the park 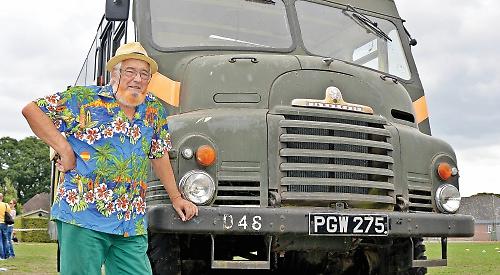 The fifth annual Party in the Park, which was held on the village memorial field on Sunday, was organised by resident Ernie Povey and a group of volunteers including members of 1st Shiplake scouts and fellow villager Charmaine Wood.

The scouts ran a barbecue and hot drinks were served in the neighbouring memorial hall and there was also an ice-cream van.

Visitors sat on blankets or lawn chairs enjoying their lunch and were entertained by musicians including the Shiplake Community Choir, conducted by Louise Rapple-Moore, whose set included medleys of songs from Rodgers and Hammerstein’s musicals and Bond film themes. Other performers included acoustic singer-songwriter Ben Atkin, who is a pupil at Shiplake College, and folk artist Pip Collings, from Emmer Green.

Mr Povey, who dyed his beard ginger for the occasion, arrived in a 1956 Bedford RLHZ “Green Goddess” fire engine which he bought as a 74th birthday present for himself in May.

The vehicle, which weighs more than five tonnes and was originally built for use in the event of nuclear war, is still in good working order and has the original pumping mechanism.

Children could try on costumes from the Shiplake and Dunsden Dramatic Organisation’s wardrobe while their parents took photographs. There was also face-painting and an obstacle course made from hay bales.

Youngsters took part in a series of races organised by assistant scout leader Jon Woodbridge and Neil George, from Binfield Heath, who compèred by walking around the site with a megaphone.

There were regular running races around a course marked out with cones, which were organised by age groups, followed by several wheelbarrow races in which adults pushed children.

Finally, there were tug of war matches between different groups of children and adults.

Mr Povey, who was running the event for the first time after the previous organisers decided to take a break, said it was a success although he was disappointed at the turnout and raising only £77 towards the running costs.

He plans to ask the parish council to make up the difference.

Mr Povey said: “I don’t know whether the attendance was down to the weather or other events. I had hoped we’d make more money for all the effort I put in.

“We want to keep it free and the food affordable but there is a lot of expenses involved so perhaps next year we can have people collecting in buckets at the gates.

“However, we mustn’t grumble as it went well and the kids, mums and dads who attended all said they had a great time.”

• See more pictures from the event in next week’s Henley Standard.