Village fete returns after year off and attracts crowds 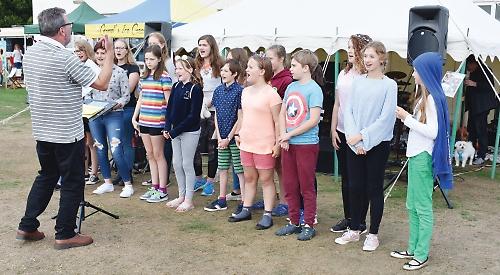 WOODCOTE’S late summer fete is “back with a bang” after a year’s absence, say organisers.

Hundreds of people attended the event, which took place for the first time since 2016 at the village green and hall off Reading Road on Saturday.

There were fairground rides and games for all ages, including a “human fruit machine” and an inflatable “sweeper” in which players stood on a platform and tried to avoid being knocked off by a rotating arm.

Other attractions included a bouncy castle, a climbing wall, a teacup roundabout, an inflatable assault course run by the Cabin Pre-School and food and market stalls run by local traders, charities and community groups.

There were also performances by rock band Sub-Zero and a choir and orchestra made up of pupils from Langtree School and conducted by music teacher Stephen Henderson.

There was a fun dog show with prizes donated by local businesses including Kimberley’s Hair Salon and the Highwayman at Exlade Street.

Visitors could also enter St Leonard’s Church in South Stoke Road and have a go at ringing the bells in exchange for a donation.

A produce show was held in the hall with prizes awarded in fruit and vegetable, art, cookery and flower classes.

The fete concluded with tug of war contests in which mothers and sons took on fathers and daughters.

Jo Lillywhite, the fete’s new chairwoman, said: “It was an amazing and successful day and really well attended.

“We had lots of people enjoying the food and had great feedback about the stalls and the range of activities for all ages.

“The fun dog show was particularly popular and there was a good selection of exhibits for the produce show. The flowers in particular were stunning.

“Loads of people joined in the tug of war and I think that shows how much people were enjoying themselves and were up for getting involved.

“I think everyone, both villagers and visitors, simply enjoyed spending time together on the green while listening to music.”

The fete was launched as Woodcote Festival in 2008 by villager Dot Tyler, who stepped down in 2014. A new committee took over and expanded it to include the dog show but then chairwoman Helena McBride stepped down due to other commitments.

There weren’t enough volunteers to run it last summer but earlier this year parish councillor
Malcolm Smith helped to recruit some more people.

Mrs Lillywhite, of Wayside Green, Woodcote, said: “We were slightly worried that we’d be building it up from scratch again but it’s back with a bang.

“People have said they’re really pleased that it’s back and are already talking about entering the next dog show or baking a cake so I guess we will have to run it again next year!”

More volunteers are still needed. Anyone who can help should email jclillywhite@gmail.com