Mayor picks a fight at town hall (sort of...) 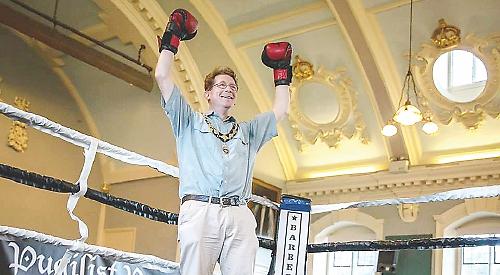 THE Mayor of Henley stepped into the ring at a charity boxing night at the town hall.

Glen Lambert posed for photographs in which he pretended to knock out fighter JD “Tracer” Francis, from Reading, who went on to win the Pugilist Pyramid cruiserweight tournament.

He also gave a short introductory speech before taking his seat to watch the action.

The boxing took place in the Queen Elizabeth II hall, where a ring was set up along with a sound system and lighting rig, and included middleweight, heavyweight and masters bouts.

The event was in aid of the Naomi House and Jack’s Place children’s hospice in Winchester and services charity Help 4 Homeless Veterans.

The hall has previously hosted a number of boxing nights in aid of Henley’s Nomad youth and community project.

Councillor Lambert said: “I’d never seen boxing at the town hall before. It was very impressive to watch and must have been pretty gruelling for the winner as he had to step into the ring, get battered for four rounds and then step back in for more after just half an hour’s rest.

“I stayed for most of the evening and saw at least half of the fights and was very impressed by the professionalism of everyone involved, particularly the referee. He did an excellent job of keeping everyone safe.

“There was a great atmosphere and everyone seemed to really enjoy it.”

The next event at the town hall will take place on February 1.