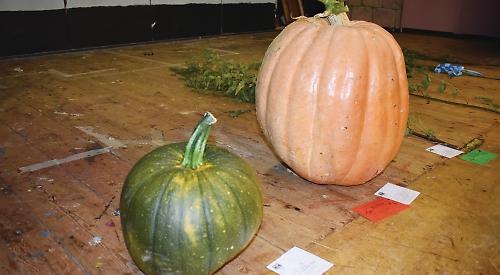 TEN prizes were awarded at a produce and art show in Woodcote as part of the village’s annual late summer fete.

Hundreds of people attended the event, which was held in the village hall while fairground games, stalls, competitions and live entertainment took place outside on the village green off Reading Road.

The fete and show were returning after taking a year off due to a shortage of volunteers but Jo Lillywhite, who helped to organise them, said the attendance was as good as ever.

She said: “There was a good variety of entries in all the categories and the hot, dry summer didn’t seem to have affected people. If anything, it appeared to help as there were some lovely apples and tomatoes and some great specimens in the floral classes.

“It was a solid and very encouraging foundation to build on for next year and we would encourage as many people as possible to think about taking part.”

The trophy winners were:

Most points in handicrafts — Ian Moss

• Last week’s report on the fete stated that Helena McBride was no longer the chairwoman. In fact, although she stepped down from the role last year due to other commitments, she took it up again earlier this year. We apologise for the error and any embarrassment caused.