Steam power at ploughing match for first time in years 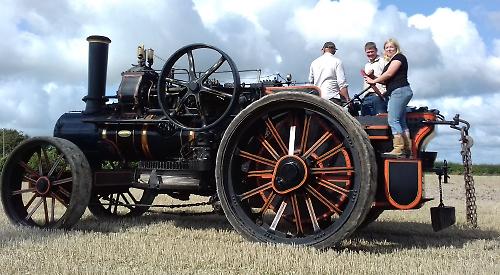 A STEAM ploughing team will appear at the Henley ploughing match for the first time in 44 years.

Dreadnought and Salty, two 1917 steam ploughs with engines designed by agricultural engineer John Fowler, will give a demonstration at the event in Dunsden on Sunday, October 7.

They will be attached to a three-furrow plough with 16in diggers.

Steam ploughs have not appeared at the event since 1975, when it used to be held on the Nettlebed estate. They were invented by Mr Fowler in 1856 and revolutionised farming, allowing a team of five men to plough up to 40 acres a day instead of the single acre that a man and a horse could cover.

The match will be held at Bishopsland off Peppard Road and runs all day, beginning with a blessing of the plough at 9am. There will demonstrations of ploughing techniques from down the ages, from four pairs of heavy horses and steam to more than 40 vintage and contemporary tractors.

Andrew Ingram, chairman of the Henley and District Agricultural Association, which runs the match, said: “It’s wonderful that steam ploughs are returning. Between them and the tractors, we shall cover at least two centuries’ worth of agricultural history.”

Entry costs £5 for adults, £3 concessions, and is free of charge to under-fives. Parking is free.