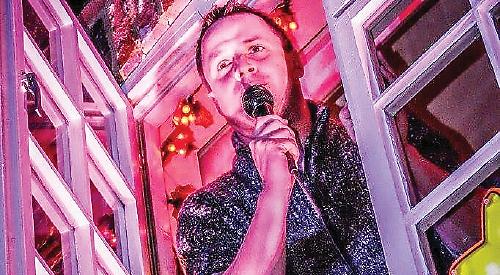 The annual charity fund-raiser involves 24 half-hour performances by singers, dancers and other acts at 6.15pm each day from December 1 to Christmas Eve.

The identity of each performer is kept secret until they actually appear, just like opening the door of a real advent calendar.

Each night will raise money for a charity or good cause, which will be able to publicise its work and hold a bucket collection. There will also be a prize raffle each evening.

The proceeds from the Christmas Eve performance will go to Henley Mayor Glen Lambert’s chosen good causes for his year in office which are Henley Music School, Gillotts School and the campaign to launch a respite service for dementia sufferers and their carers.

Richard Rodway, who chairs the calendar, said: “The calendar is only as good as the sum of its component parts and every year we raise more and more for good causes and that is because of everyone who is involved. It is those people who have been the inspiration for other towns up and down the country which have copied it, including our noisy neighbours, Reading.

“But Henley will always be the first and the best. Henley has the picture postcard venues and some fantastic performers. It is a local event, featuring local people, for local people.”

Mr Rodway, a partner at the Head Partnership solicitors in Henley, said there would be a wide variety of acts this year.

He said: “We’ve got choirs of all sizes and genres, theatrical and dramatic performances, acoustic bands, ukulele bands, orchestras and musical ensembles, solos, duos and trios and casts of thousands.”

Tomorrow’s opening performance will be on the town hall steps and in aid of the Royal British Legion’s Poppy Appeal. John Green, chairman of the Henley and Peppard branch of the Legion, said: “Despite some scepticism at the start, the calendar has been a great success and has got better and better.

“It is something that Henley looks forward to each year with its enjoyment and the practical help it gives to charities and good causes.”

Sunday’s show will be in aid of Riverside Counselling in Henley.

The YMCA in Lawson Road will benefit from Monday’s performance at the Angel on the Bridge pub.

General financial manager Lisa Grant said: “ We are delighted to be involved for a second year.

“We hope that some of our tenants will come down to enjoy the performance and help with the fund-raising. The calendar is a great idea and a great way of getting everyone in the Christmas spirit, away from commercialisation and to the true meaning of helping others.

“It is also great to create awareness of the different charities in the town.”

Tuesday night’s performance at Leander Club will be in aid of the Henley Youth Festival and will help pay for workshops at next year’s event in March.

Jo Dickson, co-chair of the festival, said: “The Living Advent Calendar is just brilliant. It involves lots of local groups and is for the community, which is just fantastic.”

Wednesday’s performance will be at the Shaun Dickens at the Boathouse restaurant in aid of the Margaret Clitherow Trust and Home For Good. Thursday’s performance will take place at the Henley 60-Plus Social Club in Greys Road car park for the first time and will be raising money for Wyfold Riding for the Disabled.

Fund-raiser Gill Rushworth said: “We are buying a new pony and she is coming next month and is called Custard.

“A lot of any money raised will go towards feeding her and our other ponies over the winter period.

“It has been such a bad summer due to the hot weather. There was no grass to feed the ponies so we had to supplement their diet by buying in hay which we will have to keep up.

“Custard will be important to us because we have got a waiting list of people and she will be able to take heavier riders than the ponies we currently have.” She added: “I think the calendar is wonderful. This will be our third or fourth time being involved with it. I’m just hoping for better weather than we had last year.”

Badgemore Primary School will be the beneficiary of the performance next Friday at Henley Cricket Club.

Headteacher Marianne Arnold said: “It is great for our children to be involved with such a great local event and we hope to have lots of people there supporting it and selling raffle tickets.

“We are having a real push towards digital learning, so any money we raise will be for learning or training.

It is so important for our children’s future that they learn digital techniques as well as reading books.”