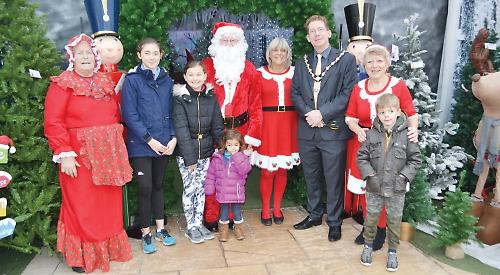 HUNDREDS of children were given the opportunity to meet Father Christmas in Henley on Saturday.

He also saw 11-year-old Charlie Ilsley, from Emmer Green, who is currently receiving specialist treatment for cancer, and also welcomed a five-month-old baby and even a puppy.

The grotto, which raises money for charity, was launched by Henley Lions Club more than a decade ago and was originally based at the old Wyevale garden centre, near Shiplake, before moving to its current home when that closed in 2009.

It is designed and built by Lynn Burgess, an assistant at the garden centre, with help from her colleagues and features a miniature “forest” of Christmas trees, other festive scenes and stuffed reindeer.

Father Christmas, who bore an uncanny resemblance to Lion John Moore, was joined by helpers Audrey Devall and Joan Evans while Chris Adam took the part of Mother Christmas. They handed out gifts to the children as they left the grotto.

Mr Moore said: “It was very popular. We saw around 80 more children than last year and they come from so far around.

“We were really proud. We really enjoy it, as do the kids, and we make a lot of money for charity.”

Martyn Sheldrake, general manager of the garden centre, said: “We don’t make anything out of it as all the profits go to the Lions. It takes three to four weeks to set up with all the team at work and especially Lynn Burgess.

“We had about 250 children over the whole weekend. There was a family from Austria and one from Melbourne, although I doubt they visited specially for that! It’s lovely seeing the children’s faces as they look at all the display animals and the sleigh out the front. It’s a big Christmas display for people to come along to.”

The grotto will be open throughout December and Father Christmas will be there every weekend in the run-up to Christmas. It costs £6 per child and each visitor will receive a present.

Half of the proceeds go to the Lions, who then use it to make donations to local charities that support children and young people. This year they will be supporting the Chiltern Centre for disabled children in Henley and the Footsteps Foundation in Dorchester, which supports families of children with neurological disorders, which were also last year’s beneficiaries.

Last year’s grotto raised £3,000 while another £1,000 was raised for the Thames Valley Air Ambulance through a “wishing well” and bucket collections.