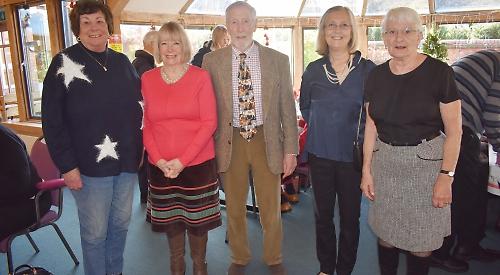 MORE than 40 people attended a Christmas lunch organised by the Henley branch of Parkinson’s UK.

The event took place at the Christ Church Centre in Reading Road and among those to attend were Henley Deputy Mayor Ken Arlett and his wife Dorothy.

The guests were served glasses of mulled wine as they arrived and then sat at long tables decorated with crackers and festive ornaments.

The centre’s volunteers cooked and served a traditional Christmas dinner.

There was also a raffle with prizes including wine, chocolate and festive treats, which was organised by volunteer Sheila Edward.

Branch chairwoman Anne Gott said: “The meal is funded by the branch and lots of people turn up every year. It’s about getting people with the same condition together.”

The group was formed about seven years ago and runs regular events including exercise classes and a summer boat trip.

It will start a Movement to Music session at the Pither Hall at the Christ Church Centre which will take place from 2pm to 3pm every other Monday, starting next week (January 7).