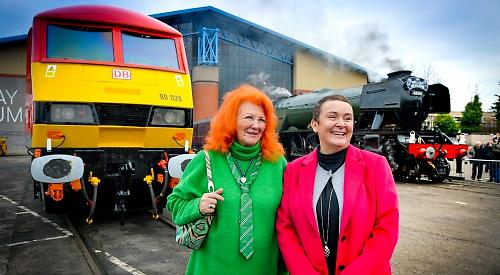 THE widow of Sir William
McAlpine attended a ceremony to name a train in honour of his success in saving Flying Scotsman.

The DB Cargo Class 90 electric unit was christened at the National Railway Museum in York on Friday.

Lady McAlpine, of Fawley Hill, travelled to the museum on the day from King’s Cross station in London on a train pulled by Flying Scotsman, which was owned by her husband for 23 years.

The memorial journey was called the “Scotsman Salute”.

Lady McAlpine said: “The atmosphere was electric and when Scotsman was pulled into the station, with her rake of Scottish Railway Preservation Society coaches and her ‘Sir William McAlpine’
headboard, the emotion was overwhelming.

“The five-hour journey flew by as the crew really showed what the old engine could do and instead of a steady 15mph through Doncaster station, as expected, someone clocked her doing 86mph!” A reception was held at the museum for the hundreds of guests before Lady McAlpine and Sir William’s son Andrew unveiled the nameplate on the electric train, which read: “Sir William McAlpine”.

The red and yellow engine, which was built by British Rail in the late Eighties, then hauled the return leg to London.

Sir William, who died in March following a period of illness, was a steam enthusiast who rescued Flying Scotsman from America in 1973.

The famous steam locomotive was built in 1923 for the London and North-Eastern Railway and retired in 1963.

Had Sir William not bought the engine, it would have remained a museum exhibit in the US. He used the engine to run day trips.

Lady McAlpine said: “Obviously this was an intensely emotional day.

“Over the past 14 years I have battled with the museum to do justice to Sir William’s achievements and to acknowledge the debt they owe him.

“I am grateful to the present director, Judith McNichol, and to Dame Mary Archer for sorting things out.

“Sir William left school at 16 and began work on a building site, learning his business from the bottom up.

“He was passionate about the need for young people to be able to do this, not to be incarcerated in an education system that was designed for academics rather than those who wanted to make things.

“To this end, we set up the Flying Scotsman Trust some years ago and those involved in creating Friday’s journey donated their services so that once basic costs are covered, the day will provide a Sir William McAlpine apprenticeship in rail engineering.”