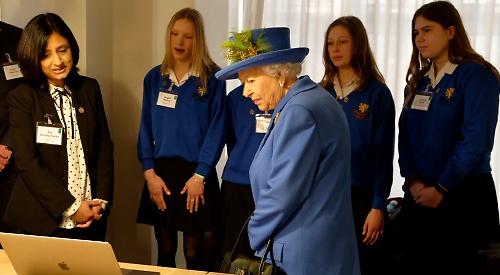 FOUR girls from the Piggott School in Wargrave met the Queen after winning a national cyber security competition.

Year nine students Jess Peck, Megan Pickup, Zara Pristov-King and Callena Wylie were introduced to Her Majesty at the centenary celebrations for GCHQ in London.

They were invited to the event after winning the 2018
CyberFirst Girls Competition, which was run by the Government’s National Cyber Security Centre.

The girls, who competed under the team name The Computifuls, were one of five Piggott teams to take part but the only one to reach the final after finishing in the top one per cent of participants.

The teams had to identify and recover from a staged ransomware attack.

The Queen attended the event to unveil a commemorative plaque, which contains two hidden messages in a tribute to the code-breakers who founded the agency.

Jess was chosen to present her with flowers. The girls also met the grandchildren of the agency’s first head Alastair Denniston and those of two generations of code-breaking women, including Bletchley Park veteran Ruth Bourne.

Patranjali Bhattacharya, head of computer science at the school, said: “It was a fantastic, once-in-a- lifetime opportunity for the girls to meet the Queen. She spent some time with us, listening very patiently to everything we had to say.

“We briefed her about the competition the girls won and how this helped them choose computer science as a GCSE option and working in cybersecurity as a potential future career.

“The Queen was shown a picture of the girls from their visit to Buckingham Palace when they were invited to tea with the Duke of York. The girls told me how much they had enjoyed this exciting day.”

More than 1,200 teams took part in the first round of the competition online.

The top 10 team were then invited to the all-day final in Manchester, where the teams had to take the role of security professionals at a company which had been the victim of a ransomware attack.

They had to identify the source and nature of the attack and recover from it before making a presentation to the company directors on their findings and how to avoid future attacks.

The team won individual prizes as well as £1,000 for the school to spend on computer equipment.