Dogs are good for us, vet tells rescue charity event 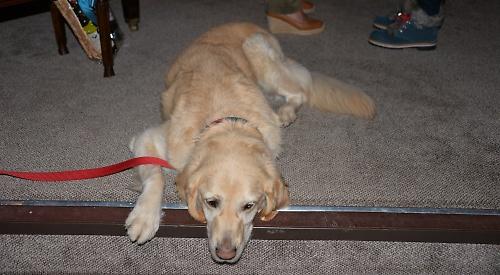 THE father of TV presenter Ben Fogle spoke at a charity fund-raiser about his love of golden retrievers.

Vet Bruce Fogle, 75, was the guest of honour at the event in the barn at Burrow Farm in Hambleden, which was attended by 80 people.

It raised £2,300 for Happy Paws Puppy Rescue, which rescues retrievers from Turkey and southern Europe. The dogs are returned to good health and found new homes in the UK.

The event was organised by Susan Walker and Caroline Hyman who gave homes to Rory and Sasha respectively. Sasha was at the event.

Mr Fogle, who runs the London Vet Clinic, said: “I have had seven golden retrievers, so I understand how they think. If I see one that needs a home it is simply a kneejerk reaction. We are the primary species in the world that does have a lifelong need to nurture and that is the reason we are here this evening.”

He spoke about the physiological changes that people experience when they stroke a dog, including lower blood pressure.

Mr Fogle said that he thought it would take one generation before animal welfare was firmly on the agenda of developing countries.

Lisa Smart, who runs the charity, said it saved 300 dogs last year and had rescued another 90 already this year.

She said: “Us Brits are crazy about our dogs. We have a very high standard of animal husbandry and welfare in this country. In Turkey, they are not as thoughtful about their animals’ welfare. We are there to help and advise and do anything we can to help people understand. I have spent the last five years building an amazing relationship with councillors, mayors and everybody with a bit of influence in Turkey.

“Through our work there we improve things not only for golden retrievers but the welfare of all the dogs we can’t bring home.”

Mrs Walker said: “To save these dogs from killing pounds is something very special.”

She said it had been hard to lose her old golden retriever Teddy to cancer but she was delighted with Rory so she wanted to raise money for the charity so it could help more people.

Raffle prizes included a signed copy of Dogs and Other Animals, a book by Mrs Hyman, who is a photographer, a portrait by Henley dog artist Clive Hemsley and a night at the Stag and Huntsman pub in Hambleden.