More entries at spring show after date is moved back 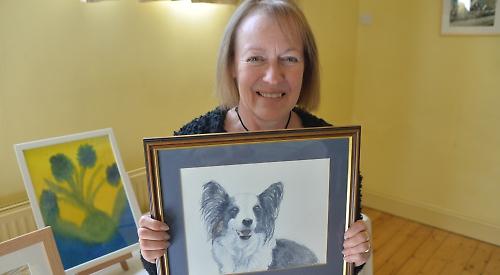 This was four more than last year and the number of entries was up too, from 128 to 129, for the second year running.

Her mixed fruit loaf and her lemon curd both came second while her three-fruit marmalade won its class. It was based on a recipe by her friend Theresa Elsome, who also competed.

Mrs Dragonetti said: “I was thrilled with the result as I’ve been entering for many years and have never won anything before. It was more about the total number of points than doing exceptionally well in any one area. It involved a lot of getting up early to see how the flowers were doing.”

Three trophies were also awarded to Liz Gibson for most points in floral arrangement, art and arts and crafts. Her entries included a watercolour painting of her late border collie Paddy, which was submitted under the theme of “my favourite pet”.

Other winners included Frances Strange, who was awarded the Douglas Allardyce Memorial Rose Bowl for most outstanding exhibit in vegetables, fruit and flowers as well as the trophy for most points in handicraft.

Hilary Dewey won the trophy for most points in the egg section and David Robinson had the most points in photography. The winner of the children’s section was Beth Strange with Isla Fox taking the runners-up rosette.

Beth submitted an egg decorated to look like an Easter chick while Isla decorated an egg with a “face” made from glitter and a feather on its forehead.

Show organiser Sue Sexon said: “It went very well and the standard of entries was very high considering the past few months’ weather, especially the unexpectedly warm week in February.

“We also held the show later in the year than normal but it didn’t affect attendance and more people were taking part, which is quite pleasing.

“Everyone seemed to enjoy themselves and we’ve certainly not had any adverse comments. We never expect to get hordes of people but it was an enjoyable afternoon and we’re very happy with how it went.”