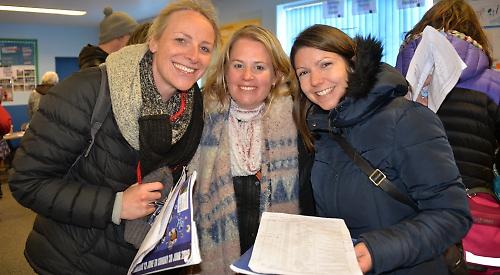 ORGANISERS of the Wargrave Village Festival made a record £70,000 from the start of ticket sales.

Hundreds of people queued up for hours outside the scout hut off East View Road for the annual ticket day event on Saturday.

Long lines formed well in advance of the tickets being sold at 9am, with many people bringing along camping chairs or stools to sit on while they waited.

Many also wrapped up in hats and scarves to keep warm while they were waiting for the hut to open. Inside, volunteers sat behind rows of tables, selling tickets for the festival’s 42 events, which include an opening performance of Shakespeare on the Green by the Wargrave Theatre Workshop on Wednesday, June 12 and the final big band performance on Sunday, June 30.

More than 3,000 tickets were sold for the events, with many people paying on card machines as the festival introduced them for the first time.

Several events also sold out, including a gin tasting evening, comedy night and “Songs from the Shows” event.

This year’s festival, which has the theme of “that’s magic” in honour of late Wargrave resident Paul Daniels, will be held over three weeks in June. Other events will include the annual sprint triathlon, a family food day run by Sticky Fingers, and a cooking school for eight- to 14-year-olds.

The biennial festival was founded by former Wargrave vicar Rev John Ratings, who died in 2014, and was first held in the summer of 1975.

Daniels, who lived in Willow Lane with his wife Debbie McGee, used to perform at the festival before his death in 2016.

McGee, a BBC radio presenter, will give a talk about her husband and show exclusive clips of them together at an event held in the festival marquee in Mill Green from 8pm on Wednesday, June 19.

Dozens of local organisations will take part in the festival, including Wargrave Theatre Workshop, the brownies, guides, cubs and scouts and the Robert Piggott junior and infant schools.

Festival chairman Graham Howe said: “Takings on the day were up on previous times. We are coming in to the 21st century with our payments as we have card machines and that assisted our record £70,000, £50,000 of which was on cards.”