Walkers and cyclists ask for pop-up cafe to become permanent 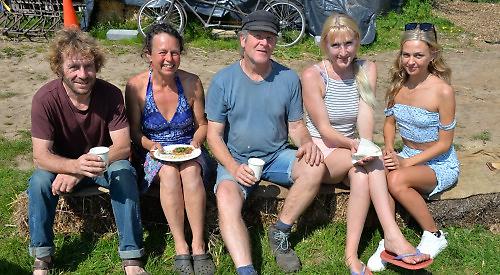 Lin’s Veg Shed, which is run by Tolhurst Organic Partnership off Hardwick Road, was selling hot drinks, salads and cakes made with produce from the estate on Easter Sunday.

Passing walkers and cyclists could purchase refreshments and enjoy them while sitting in the sunshine on haybales.

The Tolhurst family, who run the business, hope to hold another in the summer and will also be hosting a strawberry fair on June 9. This will be followed by their annual squash and pumpkin festival to be held at some point in the autumn.

The shop’s manager Eugena Tolhurst said: “We had lots of visitors, which was probably helped by the fact that the weather was scorching. It was so hot that we could actually have done with a bit more shade. Everyone who stopped said it was a lovely idea and asked if we could make it a regular thing but we can’t commit to that at the moment, although we have other events coming up.

“We would definitely like to do it every season so that we can show the full range of our produce.”

The shop is named after the partnership’s co-founder Lin Tolhurst, who came up with the idea last year but died before making it a reality. The family decided to finish the project in her memory.

Shoppers can pick up what they want and leave the money in an honesty box. The building has lights powered entirely by solar panels to allow late visits.

Ms Tolhurst said: “It’s been very successful. Everything we put on the shelves seems to fly off very quickly so customers are enjoying it.”