Thousands flock to May Fayre 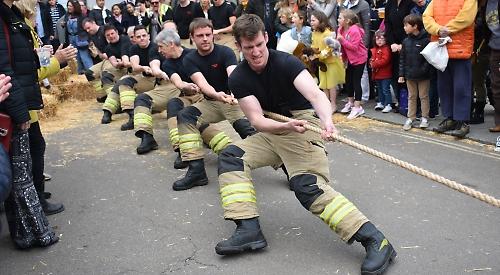 THOUSANDS of people packed the streets of Henley for the town's annual May Fayre.

The event, which was held in Market Place yesterday (Monday) afternoon, was opened by Henley Mayor Glen Lambert and fellow councillor Stefan Gawrysiak at noon and featured dozens of games, attractions and performances.

They included maypole dancing, live music and a circus-themed fancy dress competition, won for the third year in a row by nine-year-old Ethan Procter, who was dressed as a strong man.

Businesses and organisations in the town had stalls in the town centre for the event selling food and drink, clothes and jewellery. There was also a small ferris wheel for children and fairground games inclduing hook-a-duck and coconut shy.

The fayre culminated with the traditional tug-of-war, which was won by a crew of firefighters from Henley fire station. They beat the reigning champions, a side from the Row Barge pub in West Street, in a sudden-death pull-off.

For the full report and pictures, see this week’s Henley Standard.