Look out for the professional women’s cyclists racing through 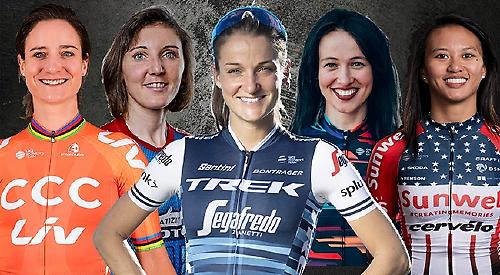 UP to 10,000 visitors could descend on Henley when an international women’s bike race visits the town for the first time on Wednesday.

The third stage of the sixth annual OVO Energy Women’s Tour, in which almost 100 elite cyclists including world champion and GB Olympic silver medallist Lizzie Deignan are competing, will set off from Market Place at 10.30am.

Spectators will gather behind barriers along both sides of Falaise Square and Hart Street as the competitors are introduced team by team on a podium in front of the town hall.

They will then parade behind a pace car along Thames Side, New Street, Bell Street and Northfield End, where marshals will direct pedestrians to keep to the pavements, before the starting flag is dropped and the race starts in earnest on Fair Mile.

The women, who are competing in 16 teams of six including the only British team Drops, will follow a 145.1km course through the South Oxfordshire countryside and towns and villages to the west before finishing at Blenheim Palace, near Oxford.

Once they have left Henley, they will be escorted by about 30 police officers and marshals on motorcycles who will enforce “rolling” road closures about 15 minutes ahead of the pack. These will be lifted as soon as they pass through each area.

There will be two additional challenges called Skoda Queen of the Mountain on the steep slope at Pishill and on Britwell Hill. Entrants will be timed and those who climb these sections the fastest will receive an award.

Road closures  in Henley will begin at 4am to allow organisers to set up the barriers and podium. Market Place will be closed until 1pm, as will the small section of West Street in front of the town hall while everything is taken down again.

There will also be a temporary one-way system in King’s Road in which drivers will only be able to proceed northwards between Hof’s bar and the entrance to the car park behind Waitrose. The Greys Road car park will be closed to serve as a changing area for competitors who will warm up and eat breakfast while mechanics repair or tune up their bikes. This will be open to the public so that fans can speak to the riders or get autographs and photographs.

The cyclists will begin arriving at about 8am, as will a team of about 200 volunteers and officials and a camera crew who will film the event from the ground and a helicopter to be shown on television.

The motorcycle marshals will also greet families and talk to youngsters about their machines.

Teams will begin appearing on the stage from about 9am. A compere will introduce them and encourage each rider to introduce themselves and talk about their racing history.

It is hoped that the starting flag will be designed by a school in the Henley area as pupils are being encouraged to draw their own in the run-up to the race. They are learning about the event in their classes and most schools along the route intend to spectate when the pack arrives.

There will not be barriers or dedicated viewing areas in any of the villages but the marshals will ensure that people position themselves safely and considerately.

The race is being organised by SweetSpot in partnership with Oxfordshire County Council, with whom it has agreed to host the race and the next two across every district within the county.

This year’s tour runs from
Monday to Saturday with the other five stages taking place in Suffolk, Kent and Warwickshire and Powys and Carmarthenshire in South Wales.

Peter Hodges, of SweetSpot, said: “The great thing about starting in Henley is the level of access that the public will have to the athletes.

“When they’re at the finish line at Blenheim Palace, some will be dragged off to the winners’ podium while most of the others will just want to get away, have a shower and get changed as soon as they can.

“Greys Road car park will be a lot like the ‘paddock’ at a motorsports event and will be very open rather than having everyone locked away. There will be a lot of vehicles because each team will have a few cars, a coach or minibus plus a van carrying all their equipment.

“The podium will be positioned so that as many people as possible can view it and there should be a space in front of the barriers where the cyclists can meet the public and sign items for them.

“The opening stretch will be very much a parade rather than a race. They won’t be going really slowly but it will be a comfortable pace as we want everyone to get a good look at them before they speed up outside Henley.

“We’re also going to have a separate start and finish line at the two Queen of the Mountain stretches and I hope those will attract small crowds.”

Mr Hodges said between 5,000 and 10,000 people could visit from outside the area and would make up about half of the crowd while the rest would be locals.

He said many businesses should benefit from the increased footfall.

He said: “We started one stage in Marlow in 2015 and it was absolutely heaving. That was a Sunday, admittedly, but a lot of fans are still likely to take a day or half-day off to watch the race depart.

“We can bring people to the area though it’s down to businesses to capitalise on that. Some will benefit more easily than others, particularly restaurants and cafés as most visitors’ first priority is to buy a coffee and a bite to eat before getting their bearings.

“It’s a good chance to show some civic pride and if people decorate their windows then visitors will be impressed with how nice the town looks and may be tempted to visit again on a quieter day.

“Anecdotally, there have been increases in visitor numbers in similar-sized market towns which have hosted the tour, though it will be hard to quantify the benefits for Henley as it hosts so many popular events over the summer.”

Mr Hodges said he and his colleagues were working flat out in the run-up to the day and they were confident the event would be a success.

He said: “We’re really looking forward to it and particularly the Oxfordshire stretch as we’ve had so much support from the county council.

“Geographically, Henley is a perfect start location because it’s a logical stop off the M25 from Kent. But more than that, it’s a picturesque market town that everyone knows because of the royal regatta and various other fixtures.

“It is a beautiful setting, as is the Chilterns countryside surrounding it, and the terrain is a good mix of long, flat stretches with some more challenging hills. You’d normally want the toughest slopes at the end but you can’t have everything!”

The event is expected to attract £7.7million in revenue across its six stages with a total of about 25,000 people spectating during the Oxfordshire stage, which is being sponsored by Henley Cycles, of Duke Street.

The full route is as follows (all timings approximate):

10.46am onwards — the B480 at Stonor and the Assendons, the main roads through Pishill and Christmas Common.

11.06am onwards — Greenfield, Hill Road, Couching Street and Brook Street in Watlington, Britwell Road, Britwell Hill and on to the B481.

11.19am onwards — the B481 at Park Corner, Nettlebed, Highmoor and Peppard Common.

11.44am onwards — the B4526 at Crays Pond, Reading Road and Wallingford Road in Goring.

11.53am onwards – Wallingford Road past the turn-offs for South Stoke and North Stoke.

12.02pm onwards — Crowmarsh Gifford, Wallingford and out of South Oxfordshire.