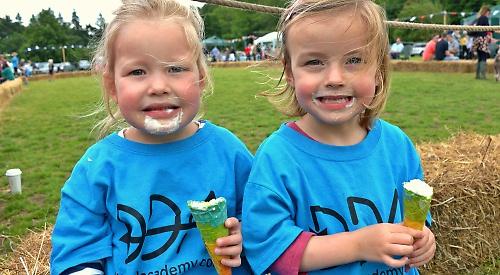 THE outgoing organiser of Harpsden village fete says she’s leaving on a high.

Hundreds of people attended this year’s event, which took place in the grounds of the village hall on Sunday.

There were children’s races in the main arena, which was marked out by straw bales which people could sit on.

There was also a fun dog show where the winners included Emerald, a six-year-old British bulldog who was deemed to look most like her owner, Alan Campbell, of Upton Close, Henley. He and his wife Jules and daughter Tarry gave the dog a home last year after she was rescued by a charity in the North-East.

He said: “She’s clearly honoured that the judges think she’s as good-looking as me!

“They asked why we’re similar and I said we’ve got wide shoulders, we’re a bit rotund and fairly lazy so I feel like we’re kindred spirits.

“She has become part of the family and is wonderful with everyone so I’d thoroughly recommend the breed for families. The only one that doesn’t get on with her is our cat Kitty.”

The fete raised £5,000 for community causes, including the upkeep of the parish church. Jane Burtt, who has been running the fete since about 2007, was pleased with the turnout.

She said: “We were worried because it was such a damp set-up but the clouds parted at just the right moment and the majority of the afternoon was in glorious sunshine, which made all the difference. We had a very similar attendance to previous years and the atmosphere was as terrific as ever with people ery happy to sit in the sun and chat with one another.

“This is a long-standing tradition in the village and people have been coming for decades. There are people who only see each other at the fete and it’s a chance for them to catch up.

“We don’t want this tradition to die out. It’s popular because of how old-fashioned it is and it would be wonderful if someone else could step up to the plate.

“I’m sure there will be someone in the village who will be able to ensure it keeps going.”

The children’s race winners were as follows: