Ancient sport’s joust the job for a day out 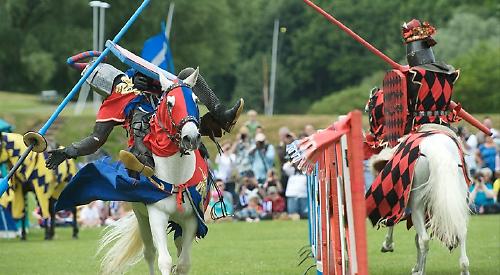 IT’S a sport that calls to mind King Arthur and his legendary Knights of the Round Table.

But in the real world of medieval kings and queens, jousting was a test of skill that proved a popular spectacle for hundreds of years.

Recent decades have witnessed something of a revival of jousting at UK venues including Warwick Castle and Hever Castle.

Now Stonor Park is getting in on the act by staging two days of medieval jousting next weekend (June 29 and 30).

A Stonor spokesman said: “For the first time Stonor will be hosting the knights of Royal England for a weekend of jousting in this medieval park.

“This will be a truly memorable jousting tournament, including horse-riding events to test courage and skill, as well as foot combat with medieval weaponry.

“There will also be falconry displays, archery and dancing dragons to add to the medieval experience.

Support the winners and heckle the losers — this is an event not to be missed!”

Founded 35 years ago and now established as one of Europe’s premiere jousting companies, the Knights of Royal England stage more than 60 shows a year.

A spokesman said: “Transport yourself back in time to the most favourite form of medieval entertainment — an exciting and colourful pageant where you can watch mounted knights charging towards each other on their destriers at up to 40 miles per hour, using lances to defeat and hopefully dismount their opponents. Jousting tournaments were the training grounds for knights of the middle ages but were also great entertainment for the local people.”

Adding to the realism of the proceedings, the Knights of Royal England show uses the same breed of horses as in medieval times.

The spokesman added: “Back then the best horses in the world came from Spain and Portugal — Andalusians and Lusitanos.

“The riding and training of these horses has changed little over the past 700 to 800 years.

“Our modern jousting horses are able to perform what is known today as ‘high school’ dressage to demonstrate their gymnastic qualities and the skills they were trained to use in medieval warfare.”

Using specially designed props and equipment including flags, a royal box and medieval tents, the show is staged in a purpose-built jousting tournament arena.

“The quality of our shows is of paramount importance,” the spokesman added. “With almost three tons of well-maintained props and equipment, we guarantee a spectacle to be remembered by all.”

In a nod to the Stonor family’s own medieval heritage, one of the knights on the blue team has been named Thomas de Camoys, 1st Baron Camoys for the occasion.

The medieval jousting at Stonor Park runs from 10am to 4pm on Saturday, June 29, and Sunday, June 30. Admission includes access to Stonor House, the gardens and the Wonder Woods children’s adventure playground.

Tickets are £14 for adults and £11 for children, with a discount of £3 per ticket on advance tickets booked online. For more information, visit www.stonor.com

The chapel will also be open to visitors, but will be closed until noon on Sunday for mass.