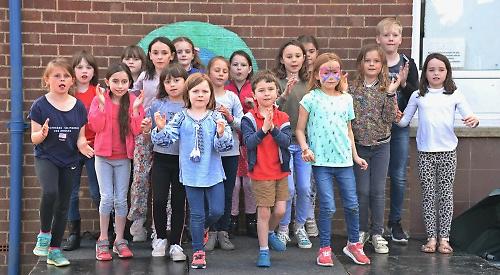 The figure is about four times the amount it has typically raised in the past as the parent-teacher association decided to hold it on a weekend instead of during the week as part of the school’s sports day.

The event took place in the school grounds on Saturday and for the first time included stalls run by local businesses selling handmade artwork and craft pieces as well as food and drink.

Stallholders included the Tolhurst Organic Partnership, from Whitchurch, and the Garden Room florists, from Goring, which held workshops on making bouquets and posies. The school’s PE teacher Sam Clothier and tennis coach Matt Whittle held football and tennis sessions on the artificial pitch and children could meet Princess Elsa, from the Disney film Frozen, and her friend the Unicorn Queen.

A choir of pupils sang Let’s Twist Again by Chubby Checker and a dance group performed a routine set to Everybody Dance by Chic.

There was also a demonstration by a Zumba dance group led by Henley instructor Charlotte Chaffey.

Children enjoyed traditional fairground activities like hook a duck and could win a giant teddy bear by correctly guessing its name.

There was also a “get your own back” stall where they could throw wet sponges at teachers, including Mr Clothier. The biggest share of proceeds came from a tombola with prizes donated by local businesses including Pizza Express in Henley and the Cherry Tree Inn in Stoke Row.

The money will support the school’s general upkeep.

Louise Dosanje, who chairs the association, said: “We had a fantastic turnout. There were lots of visitors from outside the school community, which is what we wanted, and we’ll definitely want to keep the bigger format next year.

“We’re especially grateful to all the businesses which donated tombola prizes and helped to make it a big success financially.

“It’s by far the best one we’ve had in the four years I’ve been here.”