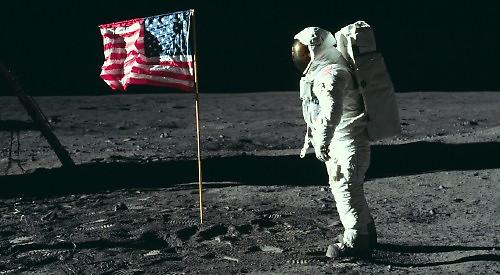 FANS of the moon landings are counting down the days to the 50th anniversary next Saturday evening (July 20).

In Henley, the occasion is being marked by a free music and film show in Market Place organised by Apollo space programme enthusiast and collector Dr Michael Warner.

Billed as a celebration of the exact day and time when 50 years ago mankind first landed on the moon, the event will get under way at 7pm with the playing of Gustav Holst’s seven-movement orchestral suite The Planets over the sound system — followed at 7.45pm by the theme from Stanley Kubrick’s 1968 film 2001: A Space Odyssey.

Henley Mayor Ken Arlett will then introduce Dr Warner, who will in turn introduce the evening’s special guest, Dr David Baker, a former NASA scientist who was working at Mission Control in Houston during the eight days it took to fly to the moon, land safely, and return to Earth.

Together they will then make an audiovisual presentation using a giant LED screen installed in Market Place, with Dr Warner narrating and Dr Baker adding expert commentary.

Having worked on the Gemini, Apollo and Shuttle programmes, Dr Baker has since written more than 80 books on the subject and was in 2017 presented with the Frederick I Ordway III Award by the British Interplanetary Society.

The evening, which is expected to run until about 10.10pm, is being supported by Henley Town Council and Gillotts School, in aid of which a collection will be taken. A “Moon Lander” science prize also will be presented to the school by Dr Baker at 9.17pm — the exact time the lunar module Eagle touched down on the southwestern edge of the Sea of Tranquility on Sunday, July 20, 1969.

Audience members are invited to bring their own chairs along to enjoy the presentation, which will also cover the space race with the Soviet Union that spurred the creation of the Mercury, Gemini and Apollo programmes.