Normality resumed for couple at festival 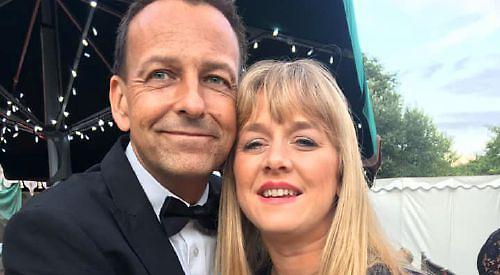 THE Dippers celebrated their good news at the Henley Festival on Thursday night last week.

The couple looked happy to be enjoying themselves following Nick’s cancer treatment, which has almost eradicated the disease. A picture on the Team Dipper facebook page shows the pair hugging in black tie and ballgown.

Mr Dipper, 51, was diagnosed with the disease in his pharynx, which connects the back of the nose to the back of the mouth, a year ago. He then learned it had spread to his bones, lung and liver and was given just a year to live. He was denied treatment on the NHS because his tumour was in the “wrong” place, so his wife Lisa launched a £140,000 fund-raising appeal.

Donations were sent in following a report by the Henley Standard in April, which enabled him to undergo pioneering treatment called immunotherapy that helps the body’s immune system recognise and attack cancer cells.

The couple, who live in Highmoor, wrote a message to accompany the picture on Facebook. It read: “Last night we tried normality at Henley Festival! Fabulous way to celebrate.”