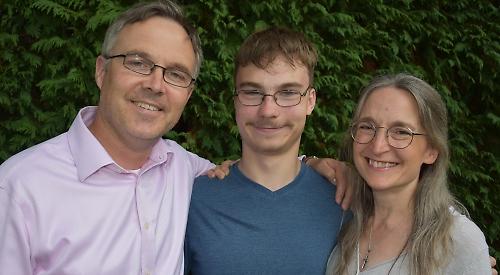 A DISABLED boy was offered a job by a company after just three weeks of work experience.

Ben Morgan, 18, from Shiplake, has a form of cerebral palsy which had knocked his confidence.

He had already done work experience as part of his school and college courses and was nervous about doing another when he tried out as a receptionist at Thames Water’s headquarters in Reading.

The company had devised a programme to suit his needs together with EMCOR, which looks after its buildings.

Ben worked on reception at Clearwater Court, answering calls, welcoming visitors and giving them their bags.

He also worked in the company’s human resources department, where he prepared meeting rooms and checked room temperatures.

He also collected, sorted and delivered mail from the post room and visited a number of other Thames Water buildings, including its science laboratories.

He was given an iPad to record his experience and take photographs and at the end of his three-week stint he gave a presentation about his experiences that so impressed EMCOR’s bosses that they offered him a job.

Ben, who lives with his parents David and Victoria and younger brother and sister, was delighted.

He said: “It was really great and a wonderful experience. I learnt a lot and it built up my confidence.

“I learnt about working life and what people need to do to earn their money and how they operate at Thames Water. I just liked the people — they were very nice. My dad works at Thames Water, so it was also a nice opportunity to talk to him at lunch.

“I don’t really have a favourite part but I transferred word documents and files into people’s folders — it was really great doing that.”

Ben, a former pupil of Shiplake Primary School and Gillotts School in Henley, who is now taking a diploma in music at Reading College, was particularly pleased with his presentation.

He said: “That was really good and I was much more confident about all the things I had learnt.

“I set up a PowerPoint presentation with pictures and all the key things that I had done, what I enjoyed about them and the whole experience.”

Ben’s condition, a right-sided hemiplegia, has affected his motor skills so he can only write with his left hand and it makes him feel nervous.

Ben’s father, who works in Thames Water’s treasury department, said: “His disability has given him various challenges over the years, meaning he has to work much harder to achieve the same results.

“It was a wonderful three-week programme. Every step was fully explained and supported with kindness and respect.

“Ben has been transformed from being nervous about every new task to taking it all in his stride.

“He has started being more and more vocal and asking questions and having a lot more interaction.

“We are very pleased. Our perception of his prospects have changed very much for the positive as this has given him an insight into working life and will hopefully increase his independence and his ability to hold down a job and progress.”

Ben’s mother said: “The staff said how much they had appreciated his help, enthusiasm and politeness and he had really grasped the opportunity and made the most of it.

“He was very pleased and enjoyed it as he really liked the people.  If you haven’t been in an office before, it’s a bold new environment and experience.”

Mrs Morgan said she had never seen Ben give a presentation before, adding: “I was really impressed.”

Mrs Novak said: “Ben said this was one of the best experiences of his life.

“Seeing how life-changing this experience was brought not only a lot of joy for Ben but also myself and the team.  It’s so rewarding when we can pull together and arrange something like this.

“The best and greatest part was that at the end of the meeting EMCOR asked if Ben would like to work for them at Clearwater Court going forward because of how well he had contributed.”

Last month, Thames Water was awarded disability confidence leader status by the Department for Work and Pensions for its commitment to employing, supporting and retaining disabled people.