Runners remain cool in the rain 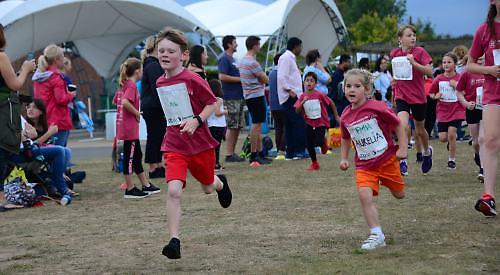 MORE than 200 people completed the third annual Emmer Green 10km despite having to run in heavy rain.

The total was about 50 more than finished last year’s race but the winning time of 38 minutes and 53 seconds was almost a minute slower than the best time in 2018.

The race took place on the morning of Sunday, September 22. The runners set off from the playing field at Emmer Green Primary School and followed a route through Tokers Green, Kidmore End and Chalkhouse Green before returning to the school in Grove Road.

The event also featured the Mini-Oak Challenge in which about 150 children took part.

They had to complete as many 300m laps of the field as possible in 90 minutes.

The children and their participants in the main race took part in a warm-up led by school parent Gareth France, from Emmer Green.

He demonstrated stretches and lunges for the runners to imitate from a podium .

The start of the main race was watched by the children and spectators who cheered and applauded as they went off.

A few minutes later, the children lined up for the start of their laps and parents jostled for position in order to take photographs and film the action.

When they set off, the children sprinted away, battling for the lead, but about half way round the first lap some of them began to tire.

Their families chuckled as they stopped to catch their breath but then cheered as each child crossed the line to begin another lap.

When each child had had enough they were presented with a small wooden medal with a number on it recording how many laps they completed.

The rain began to fall heavily a few minutes before the first of the adult runners returned.

As soon as they had collected their race time, they rushed inside the school hall to enjoy a drink and snack, which were provided by the True Foods Community Co-operative in Grove Road.

Many of the children continued to run despite the downpours.

The event raised about £7,000 for the school, which will be used to replace laptops and other ICT equipment.

Organiser Karen Allen, a member of the school’s parent-teacher association, said it was nice to see an increase in the numbers of runners for a second year and more members of athletics clubs taking part.

She said: “This year we were doing chip timing for the first time and I think that brought a lot more runners. They want accurate timing.

“The general feedback has been really good. Everyone loved the course despite the rain.

“Halfway round, the runners were quite happy it started because it was a bit of welcome relief and helped cool them down.

“They also said our marshals were the friendliest around, which was really nice.”

Mrs Allen founded the event as she is a keen runner but there wasn’t a local race.

She said: “I wanted a local run for local mums. I also wanted to get the kids active and help them enjoy their running.

“We also wanted to raise money for the primary school because of cuts to the budget. We started off with about 120 runners three years ago and the number has built up.

“Quite a few of the mums were surprised by how determined the kids were this year.

“At least 20 of them ran 10km just going round and round the field.

“I want to thank everyone who helped on the day.”