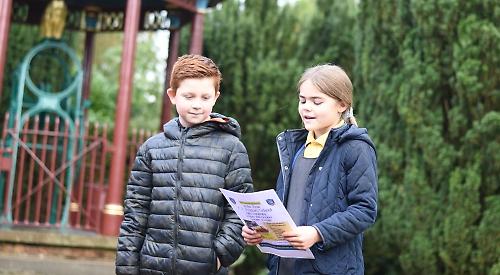 NEW information boards have been installed at the Maharajah’s Well in Stoke Row.

The boards, which cost £14,000, tell the history of the well and its significance to Anglo-Indian relations.

The well was sunk in 1863 thanks to the local squire Edward Reade, who was acting governor general of the United Provinces to the Maharajah of Benares (now Varanasi).

The Maharajah was moved by Mr Reade’s account of the effect of a drought in the Chilterns so he provided funds to sink the well. The well is now maintained by a trust, which receives income by renting out the old well-keeper’s cottage next door.

The trust contributed half of the cost of the boards and successfully applied to the National Heritage Lottery Fund for the other half.

The boards were unveiled at a ceremony attended by members of the trust and Arts Asia as well as villagers.

Maisie Redston and Leo Vanni, who are pupils from Stoke Row Primary School, gave a brief talk about the significance of the well. Catherine Hale, who lives in Newlands Lane and chairs the trust, said it was important to cherish the well.

She said: “Villagers have tended to take the well for granted and I think it is really important to reignite local interest in it.

“These boards will help to tell the story of the well in more detail than before and with better images. There were booklets here and two metal signs, which were very old and worn out.”

Neena Sohal, co-founder of Arts Asia and the project manager, said: “We have brought in more than 300 visitors since the start of the year, from schoolchildren to local community organisations.

“There is a hidden history here that we really want to tell people about.

“The project has involved going into schools and there was also an exhibition at Reading Museum, which included a film.”

Last year, the well was restored at a cost of £25,000. The work included repainting the elephant and spire with 24-carat gold leaf.